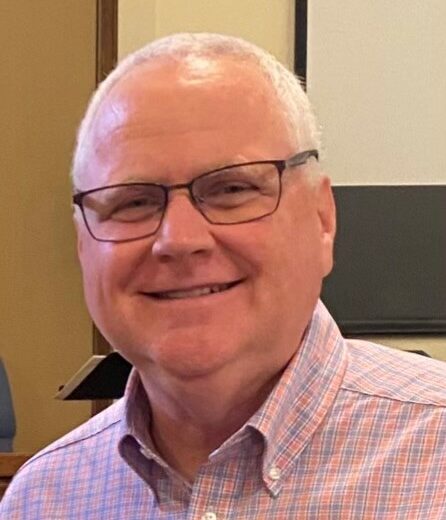 Cameron DeBrew is the Lead Pastor of Beulah Baptist in Hopkins. He currently serves on the CMBA Administrative Team which meets almost monthly to conduct business and share ministry updates from our Family of Churches across the Midlands. The group will hold its January 2023 meeting at Beulah.

Cameron has one of the most unique ministry stories in CMBA. A more detailed account of it was covered in an October 2021 article, but it’s significant to note that his entire staff ministry career has been at Beulah. After graduating from Southern Seminary, Cameron became Beulah’s Minister of Music and held that role for about 22 years.

Beulah decided to rearrange its pastoral leadership position when the senior pastor resigned about eight years ago. At that time, Cameron and Youth Pastor Ken Addison had created a strong ministry relationship serving Beulah together for many years. The congregation decided to name Cameron as its Lead Pastor and Ken became Teaching Pastor. Cameron acknowledges that Beulah’s ministry structure is unique and playfully calls himself a “unicorn” because “there are no other guys like me in the association, state, or really anywhere else.”

Beulah was founded in 1806, when Thomas Jefferson was president. The church has worked through darker parts of its history over the years, including the presence of a pre-Civil War-era balcony for slaves. Today Beulah strives to be a church active in local school participation and outreach events to let the Lower Richland community know it is “missions-minded, loves the Lord, and looks forward to serving them and the Kingdom in every way.”

2022 was the first year Beulah has had a debt-free budget, and Cameron says this is a new chapter of ministry for the church. “Because of that burden being gone, we have been able to increase giving to the Cooperative Program and Lottie Moon, and to local, national, and international ministry partners,” he adds.

In the last year, Beulah has also hired a new part time staff member who lives with his family in a local apartment complex as resident missionaries to that community. Cameron calls this an “exciting addition” to Beulah’s reach, because the couple has “privileges living in that community that I don’t have as a pastor going in to talk with residents there.”

A native of Shelby, N.C., Cameron has been married to his high school sweetheart Donna since 1989, and the couple has two adult children, Justin and Jenna. Cameron studied at Brevard College before finishing his undergraduate degree at the University of North Carolina in Greensboro. He enjoys playing the guitar as he leads Beulah’s Sunday morning worship and also plays the trumpet for the South Carolina Singing Churchmen, a group he’s been a part of for many years.

As he looks to celebrate his 30th anniversary at Beulah this year, Cameron appreciates having new opportunities to engage with other CMBA pastors and members at the associational level. He’s in the second year of his first term serving on the Administrative Team, and says he realizes the critical need to continue building relationships.

“Serving on the Administrative Team has been eye-opening. There are pastors in very close proximity to me that I did not know, and they did not know me. I see the need for us to cooperate more and relate more to each other,” Cameron says. “CMBA has helped me and other pastors have the opportunity to hear from others in the association to learn what’s going on and know how we can help each other, through our resources and through prayer.”