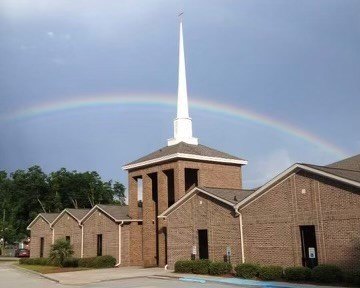 God performed a miracle through Beulah Baptist. This month the church paid off debt it had carried for 18 years, and the congregation is now looking forward to what other miracles God has in store. According to Pastor Cameron DeBrew, Beulah was a smaller church with regular people on regular salaries in the midst of a pandemic when God showed them what was possible if they could just achieve financial freedom.

“Our leadership and congregation began praying earnestly that God would take the debt from us. I prayed that it would happen in His time, but sooner rather than later if it was His will,” DeBrew says.

The pastor began vision casting by posing questions like, what else could be purchased with the same amounts they were paying per month and per year? What else would benefit the Kingdom through that level of resource? Members looked to ministries they already supported like the fresh water well drilling or the mission in India that works to free enslaved children, and they wanted to be available to their community in a way that they weren’t able to while under the weight of debt. DeBrew is careful to point out their focus wasn’t on “new money,” but rather resources God had already given to His people but for too long had been allocated to the bank.

Beulah’s Church Advisory Team prayed with staff leadership about God’s vision for the process and for a new budget. It’s a great time to explain another “God Story,” about how pastoral leadership is arranged at Beulah.

DeBrew was originally called to the church as music pastor in 1993. Several years later Ken Addison joined the staff as youth pastor and the two developed a strong relationship working and serving together. When Beulah’s former pastor resigned eight years ago the two men stepped in as an interim team to lead and preach, but with DeBrew serving as the lead preacher. He says the personal mystery of why he’d pursued a Master of Divinity in church music many years before finally became clear when the pastor search committee approached DeBrew about becoming the pastor of Beulah.

Today, DeBrew serves as lead pastor over administration and vision casting, and still leads music each week. Addison preaches most Sundays, causing DeBrew to say he is likely the “face of our church, because that’s who you’d see on live stream or in services!” DeBrew cites the perfect combination of God calling both men to Beulah and keeping them there, a loving congregation that knew both men, and the level of trust that exists in their relationship that makes their arrangement work.

“Our church has seen us grow spiritually and in maturity. They were bringing us along as part of the family to lead the family. We have a shared vision and that allowed us to humbly submit to this process. As individuals we may feel inadequate, but as a team we are beneficial to the Kingdom,” DeBrew explains.

These unique leadership partners can now add church financial freedom to their list of experiences together. Beulah’s original goal was to pay off the debt by June 2022 then, as the total owed reduced so rapidly, the date was revised to December 2021. A spring BBQ fundraiser brought in $11,000 and someone offered to match the amount of an extra payment if the church could collect the mortgage payment amount (it did). In fact, the congregation managed to make almost 10 extra mortgage payments in 2021 alone.

“It’s amazing. I look around my congregation and we’re not wealthy people. I can’t point to one or two people that gave a bunch of money. We are regular workers and teachers that don’t make extra money, but God has been faithful in seeing this debt come to an end,” DeBrew marvels, adding there was no church capital campaign, just God moving among his people.

Beulah is already seeing some of its missions and ministry visions realized as the church can now leverage its resources for the Kingdom differently moving forward. The congregation is sponsoring a young couple from Beulah living as community missions pastors in a local apartment complex. DeBrew reports the church has also increased giving to other local and international ministry partners. Paying off the debt is not the finish line, rather “the starting line for what God will do through us by eliminating this heavy ball around our necks.”

To the sister church facing seemingly insurmountable debt, DeBrew reminds that God is faithful to His people crying out to Him. That includes pastors who may wrestle with how to lead a church through the journey of becoming debt-free and to the next season that awaits.

“Once you step across the line to obey, there is great responsibility to steward the gifts well that He has given us. When times were so lean, God was faithful to replace a roof or air conditioners. When there was significant cost He provided, and there was no reason He wouldn’t be faithful in the future,” DeBrew says.

That attitude of assurance has led Beulah to this point, and that same trust is guiding them forward.

According to DeBrew, “ours was a big debt, and we are not a large congregation with a surprise financial gift. God gets full credit for His faithfulness and for God’s people having obedience.”