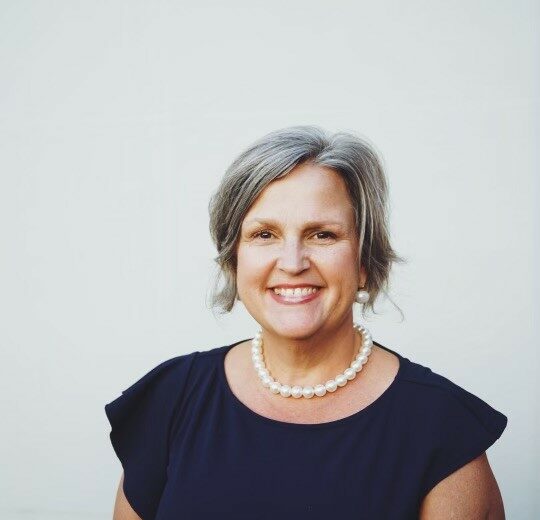 Rhonda Failoni is a pastoral counselor and member of Riverbend Community Church, a Church Network Connection member of CMBA. She is in her first term serving on the Visionary Leadership Community (VLC), which meets almost monthly to conduct CMBA business and share ministry updates from our Family of Church across the Midlands.

A native of Illinois, Rhonda has been married to husband Jody for 36 years. They met “on the night I got saved. I said I was going to marry that man, and I did,” Rhonda recalls. The couple has four adult children and five grandchildren, with another on the way.

The Failoni family spent seven years working as global workers through education in international schools in China and the United Arab Emirates. While in those countries, Rhonda and Jody regularly had local people in their homes for Bible studies and marriage training. Rhonda also started a guidance counseling program in one of the United Arab Emirates schools. When the family moved back to the United States in 2003, Rhonda says she experienced a sort of culture shock.

“Re-entry to the United States was difficult. We were hurting but, at that time, people didn’t talk as much about being in pain. Fast-forward to today, everyone is struggling so for some it’s easier to talk about it,” she says.

Through the re-entry process Rhonda met with a pastor and said she began to recognize that there was a void of females in church leadership and female counselors. It was during this time that God led her to begin her degree in Pastoral Counseling and Spiritual Formation, so that she could eventually meet a growing need in churches by “coming alongside a believer of any denomination to help them in their seasons of doubt, trials, grief, loss, and transition, and to feel safe and not judged in the process.”

Rhonda founded Crescent Oasis Counseling & Coaching in 2016, a pastoral counseling practice committed to providing peace and safety to those in the midst of hurt and brokenness. “We care for the heart of believers navigating the hard places in life,” she explains.

Post-Covid, Rhonda is seeing that problems, grief, and loss are being compounded for many people, and the emotional and spiritual well they have always drawn from is also empty. Pastoral counseling is done individually, which Rhonda says can be a barrier for some in realizing when to seek help.

“When someone is struggling and their reserve is empty, they are not likely to bring this up in a life group or larger group setting, so they continue to struggle privately. I give permission that it’s ok to seek help. As a pastoral counselor, I don’t diagnose but use counseling techniques with biblical integration,” she says of her services.

Rhonda’s self-described love of hearing others’ stories and meeting new people is not only used in her work and ministry, it’s being utilized through her service through VLC. Since joining in January 2020, Rhonda says she has been surprised about the extent of CMBA’s presence and outreach throughout the Midlands through partnership ministries “like the food pantry and at the State Fair. I appreciate seeing the bigger picture and being able to come alongside of that.” She knew smaller churches benefitted from CMBA connections and has learned ways that larger churches and their membership can also be blessed through the work of the association.

When asked how she sees God at work right now in the CMBA, she points to the anticipation that exists during transition and the invitation to lean into God for those next steps. “It’s exciting to see the humility in [new Associational Missions Strategist] Jamie Rogers. It speaks volumes that he is inviting us to return to the roots and basics of prayer. It’s seeing where God is working and joining Him in it,” she says.

CMBA Preteen Travels to Honduras to Share the Gospel