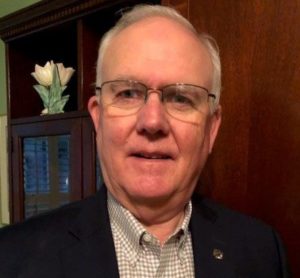 Robert Grant began his work as an Empowering Congregations Ministry Mobilizer with the Columbia Metro Baptist Association (CMBA) in April. With more than 40 years of combined experience serving on staff at the local church and state convention levels, and additional time consulting, Robert is well equipped to help churches with a variety of general administration needs. He also has remarkable ties to the association.

“Right out of seminary I served as minister of education and administration at Greenlawn Baptist Church in Columbia for several years, then went to North Trenholm Baptist Church. As far as church service is concerned, Columbia Metro is the only association I’ve served,” he says.

Flashing a keen sense of humor, Robert shares that he grew up an only child, “and still am.” His father worked for the Pepsi Corporation for 42 years and his mother was an interior designer. After graduating from high school in Greenville, Robert earned degrees from Gardner-Webb University and Southwestern Baptist Theological Seminary. He and his wife Robin are celebrating 45 years of marriage this year while enjoying their new roles as grandparents to seven-month-old Maryn, who lives nearby in Lexington.

“It’s been wonderful to see our granddaughter born healthy, to watch our daughter become a mother and to live this transformation that grandparents have in the process,” he adds.

Just a few months into his new role with the CMBA, Robert has already begun working with churches and offering general administration services including bylaws assistance, staff compensation studies and church dissolution assistance. Church administration work involves slow, often tedious, kinds of actions but each element is essential to the creating of a healthy organization. Robert says he looks forward to helping churches through the details of what could otherwise be a confusing process.

“No one person can walk up and say, ‘let’s just do that.’ It takes a time period to go through, then time to put forms together to help address the steps involved in the processes,” he explains.

For example, when a church is facing dissolution there are certain legal requirements put forth by the Secretary of State and the Attorney General of South Carolina. While each case is different, Robert says it’s vitally important for a church to understand what the law says as it carefully works through the process. Robert can assist by meeting with remaining church members, presenting options for moving forward and helping to complete the necessary documents.

“Each case is different. Some churches will dissolve, merge or be adopted by another church. It’s also different working with four people, versus 14, versus 400 people. I have the system down step-by-step with sample materials and actual deeds from government offices so, once we get started, I can pull the components and plug them in based on the church’s needs at the time,” Robert explains.

This attention to detail is what drew Robert to the new CMBA position, because he values helping churches go through administration processes correctly. He acknowledges that there are certain mechanics to the process – such as compliance to regulations – but he also enjoys engaging with church staff and members to give options for how things can be done. Regardless of the element of administration, some churches will be advanced in any given process while others have no idea where to begin.

“I want to give churches facing dissolution, for example, the opportunity to start a new work such as with a language group or sell the property which would lead to setting up a trust to continue giving in the church’s name. My experience in the past has helped me to be able to say to a church ‘let’s think about it this way’ or ‘have you considered doing it this way.’ It’s a matter of taking the time to look at the variety of ways that the situation could be handled with integrity,” he says.

Hope is another dimension of Robert’s work in that he seeks to offer opportunities for churches to consider ways that they can move forward while leaving a legacy. He envisions standing in the gap with a church to help make the right decisions at the right time, which sometimes will involve other churches.

“We see ourselves as an association that helps generate communication and partnership among churches. Whether it’s bylaws, general church administration, working with compensation of staff members or merging churches, the point is to do it God’s way by preserving the integrity of the congregation and leaving a legacy while doing it,” he says.

Robert’s own legacy includes his active membership at Lexington Baptist Church for more than 20 years. During that time, he has served two deacon terms and played trombone in the church’s orchestra. He founded the Camo Class at Lexington Baptist three years ago, aiming to reach unengaged men who like to hunt, fish and shoot. The class has grown into an active and ‘eclectic’ group.

“The class is designed for men who would not attend a Sunday School class with their wives or who are not engaged while their wives attend other classes. It’s a service-minded group that has begun to do special projects within the church, such as heading up a golf cart service carrying folks to and from parking areas on Sunday mornings and building ramps and decks for local homeowners. We’ve also baptized three members in last two years,” he says.

As he looks back on his extensive ministry career while celebrating how God is actively using him in the local church, Robert is also excited about this new opportunity to serve CMBA churches, church staff and members.

“God has left enough grease on the wheel that He wants me to keep going without squeaking. There’s a lot of responsibility in this role that I have done before, and that’s not common experience to everyone. I’m glad to be able to plug into those places where I have the expertise when I’m called upon to do it,” he says.

To reach Robert for services related to church administration or legacy needs contact the CMBA office at 803.619.7110.