Robbie McAlister: “God is Sovereignly Doing Something” Through Ukraine 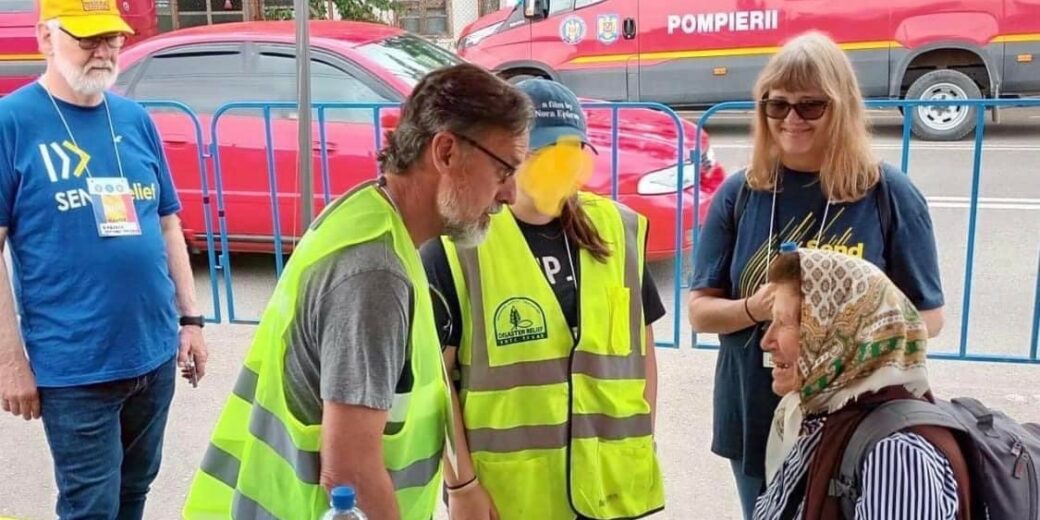 The war in Ukraine and subsequent refugee crises have been leading stories across news platforms for most of 2022. South Carolina Baptists have been responding to needs through existing ministry connections that remain in Ukraine, partnerships with organizations, and relief efforts including that of a six-member mission team that traveled earlier this summer with the Southern Baptist Convention’s SEND Relief Group. CMBA’s Robbie McAlister, who also serves as a strategist with the South Carolina Baptist Convention and was a former church planter in Ukraine for a decade, recently shared about this team’s experience serving the people he still holds dear.

“People may not be aware that Ukraine is the second largest concentrated Baptist community in the world, behind the United States, and has had a Christian presence that dates back to the 16th century,” McAlister explains, adding that the number of refugees displaced in such a short amount of time as a result of the Russian occupation is something the world hasn’t seen on this scale “since the second World War. Yet the Church of Ukraine is incredibly missions-minded and as they have scattered, they have taken the gospel with them. Some of these refugees are now in the least-reached areas of Europe. God is sovereignly doing something through this.”

SBC SEND Relief groups have been serving in the countries surrounding Ukraine, doing what they can to reach the estimated seven million displaced Ukrainians who have fled their homeland to these new areas. McAlister says his team was the only evangelical group at the Romanian-Ukrainian border during their trip. They were able to distribute Bibles and bottles of water and pray with hurting people.

“I speak Russian and was able to pray with people in their language. It was a great opportunity to serve and love people in crisis,” McAlister says of the experience.

The former church planter maintains relationships in Ukraine and has kept up with breaking news and updates literally from the front lines of the Russian invasion as it began. McAlister has been able to share photos and first-hand stories on his social media page, encouraging believers to pray for specific things as the war developed and the humanitarian crisis became clear. His experience planting churches and living among Ukrainians has also given him a unique perspective to share what is happening there today through the lens of the country’s history and distinctive culture.

“Ukraine has been a culturally and ethnically diverse and distinct country for centuries. It is the birthplace of Orthodox Christianity in the Slavic world, which originated in the 10th Century. Even though it has been fought over and dominated by other empires for years, it has maintained a distinct ethnic identity with its own literature, language, and culture. Ukraine is not just ‘part of Russia,’ and longs for recognition of its own identity,” according to McAlister.

From a faith perspective, McAlister says people migrated eastward toward Ukraine and Russia starting in the earliest days of Reformation. He calls Ukraine the “largest missionary sending region to the Soviet Union” because thousands of missionaries across the centuries have been sent throughout the Russian-speaking world.

After serving on several short mission trips to the region, McAlister and his wife Carissa were called to move with their three young sons to Ukraine in the mid-1990’s to plant churches and work in leadership development.

“There was an existing vibrant missionary heart and DNA within the Ukrainian churches. During our time there we were able to see God start many churches, send missionaries, and train pastors. There was also a sense among the nationals that their country’s freedom might not last forever, so they capitalized on that unique moment of history during the collapse of the Soviet Union. We saw a sort of ‘truth vacuum,’ with people asking how to be saved and desperate for truth. Globally, those moments are rare, and we were so thankful to be a part of it,” McAlister says of that time.

Flash forward to present-day and it’s easy to see how existing relationships the SBC ministries of SEND Relief and Disaster Relief have with Eastern European partners can provide an open door to meaningful ministry.

“Since the war began on February 24, SBC has emphasized cooperation with national believers on the ground and mobilized resources and teams to work primarily along the border through special projects, local churches and denominational initiatives providing crisis care, trauma mitigation, humanitarian relief, and gospel engagement all while showing love,” McAlister says, adding CMBA has been a part of these efforts.

Along the way SEND Relief provided help with border assessments and projects as refugees would pass through other western European countries, and state convention Disaster Relief responders assigned to this region of the world worked through existing Romanian relationships to host short term mission teams there. The South Carolina team served along Romania’s border with Ukraine greeting refugees and providing food, water, and toys for children. They served local Romanian congregations and were invited to preach in their churches. The team assessed several church buildings that serve as short-term housing for refugees, and they helped load a van that went on to carry over a ton of food across the border.

“Since I have returned from this trip, I feel a bit like Paul’s mission journey in Acts 14. I’ve been sharing with CMBA churches about what we have seen and experienced. I love giving reports of what God has done, what He is doing and what we know He will do,” McAlister says.

What can CMBA members and churches do to meaningfully support these efforts and ongoing ministries? McAlister invites everyone to pray, support SEND Relief and, when led, to explore short-term mission trip opportunities. Several SCBC Slavic churches in the Upstate are working with home churches from Ukraine and McAlister can connect inquiring churches with several key ways to become involved in direct ministry to this people group.

For more information contact McAlister by email at robertmcalister57@gmail.com or by cell at 803.315.2741.