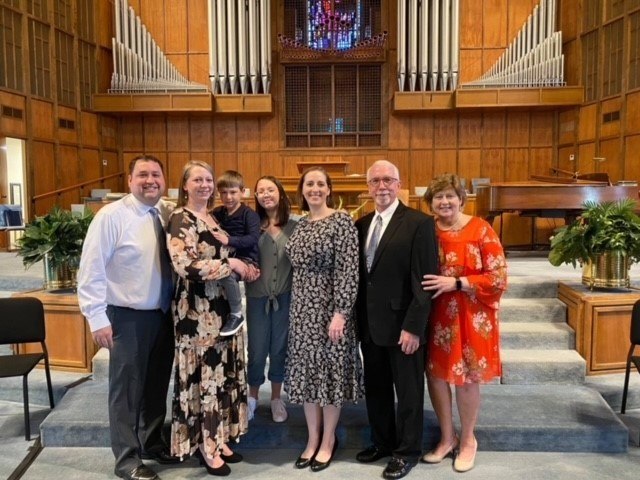 Fred DeFoor has retired after serving 34 years as Minister of Music at St. Andrews Baptist Church (SABC) in Columbia. A weekend retirement celebration included being awarded the Order of the Palmetto by Governor McMaster and during his final Sunday worship service on March 7, SABC declared DeFoor as its Minister of Music and Associate Pastor Emeritus.

“The length of Fred’s tenure at St. Andrews has made him a living bridge to earlier chapters of the church’s life. He shares decades of history, hundreds of stories and thousands of connections with people in the church and community,” says SABC Pastor Dee Vaughan.

DeFoor said his church family has “inspired” him both in music and pastoral ministries and that he is grateful for their “love and friendship, for the music, for the ministry, for the affirmations for the challenges we faced, and the mountain tops we’ve enjoyed together. Oh, magnify the Lord with me and let us exalt his name, together.”

A Greenville native, DeFoor met his wife Cindy while they were students at Furman University. They married in 1978 and went on to have two daughters. Clare and her husband, Travis Eggleston, have two children and live in Georgia, and daughter Judith is currently completing a master’s degree in speech and language pathology. After graduating from Southern Seminary, DeFoor served in youth and music ministry positions at Unity Baptist Church in Newnan, G.A., and First Baptist Goldsboro, N.C., before coming to SABC in 1987.

“When Cindy and l look back, we don’t know how we did it. Some Sundays were all day and Wednesday nights went late. It makes you sensitive to everyone else’s real lives and the sacrifices folks make to be involved in the local church. These years also gave our children leadership opportunities and allowed Cindy to express her gifts and talents,” says DeFoor of his time in ministry.

When asked about the changes he has seen in music ministry through the years, DeFoor points to the value and context of worship. He says the practice of having someone on church staff to give leadership to music ministry to that particular church will always exist in some form or another. With regard to music preferences and trends moving forward, the changes will likely continue.

“There has to be effort at some level to minister to people at their interest level. If someone comes to church leadership and says, ‘we ought to begin an after-school ministry to children,’ you say, ‘when can you start?’ When someone says, ‘I think we ought to have a guitar and some singers up there,’ you do what you can to respond positively to people’s needs and specific requests,” he explains.

“Fred has served St. Andrews guided by a vision for worship and music from which he has never strayed or compromised. He has worked with a fiercely independent spirit, taking ownership of his part of the church’s ministry and led it with deep determination,” Vaughan adds.

As he recalls special memories from his time at SABC, DeFoor notes countless musicals and special programs and how music has touched all ages within the church. “I love the idea of traditions in a church family and was fortunate to begin a few at St. Andrews. We celebrated the 30th American Hymn Tunes and Spirituals in 2019 and over the years invited local Presbyterian, Lutheran and AME choirs to join us. It became a community event and was the most popular service around here,” DeFoor recalls.

As members of St. Andrews Baptist for DeFoor’s entire tenure there, Brenda Sheets and her family have a unique perspective on worshipping under his leadership. “I smile when I think of how Fred helped develop a deeper appreciation of music in the lives of my family, and over the years I have watched Fred share his love of music with everyone from toddlers to senior adults. [My husband] Tom and I especially enjoyed participating with Fred on various youth summer mission trips where the youth choirs presented their gift of worship through music with many different audiences,” recalls Sheets, who also serves as treasurer on the CMBA Visionary Leadership Community.

Vaughan agrees, adding that “when SABC people speak of Fred, they remember youth mission trips and choir tours, children’s musicals and summer camps, family weddings and funerals, special events that span generations and remind them of wonderful times past like thumbing through an old photo album. No other leader in our church’s life has shared so much holy history with our people.”

According to DeFoor, that “holy history” has helped him glean some important lessons. To new music ministers just starting out, he advises gaining experience in areas where they may eventually lead people and talking with a seasoned minister about their experiences and advice on building relationships with other staff members. He emphasizes the need for ongoing personal spiritual development and professional growth and to “write personal notes of thanks and affirmation to people as often as you can.”

For his part, Vaughan admires DeFoor’s perseverance serving through every season of ministry at SABC. “Fred told me once that he was sustained by his commitment to do his best with the group God places in front of him at that moment, regardless of size. That, I believe, is a good way to live and serve.”

OPP 054: The Past, Present, and Future Hope of Worship

CMBA Family – Are you ready? Is your church ready?