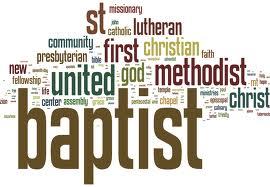 Denominational service is a unique spiritual calling within God’s constellation of calls. It is not for people who simply want to expand their area of influence or territory as some claim through the prayer of Jabez. It is not for people who figured out a growth formula that worked for them in their local congregation, and now they want everyone else to know about it and replicate it.

I grew up in the home of a denominational servant. This allowed me to learn at the dining room table, riding to and from meetings with my father, and hearing him speak and teach, more about denominations than I could learn in many years of classroom study and reading books. I caught numerous learnings by osmosis and my father’s demonstration of how denominations empower congregational movements. I saw my father most excited about ministry when he was helping congregations and their leaders engage in increasingly vital and vibrant ministry.

As part of the journey of my call to Christian ministry that began at the age of 12, I felt that one day I might serve in a denominational role that would help many congregations rather than just the one I served as pastor. Unexpectedly my life as a denominational servant and a consultant to congregations began at age 26 and continues 42 years later.

Those without a unique spiritual calling to denominational work struggle. At times their struggle does not become obvious until 12 to 18 months into their role. After a year or so you can hear these people saying things like, “If I went back into the local church right now, I could really clean up. I have learned so much in this this past year about how badly many people lead congregations, and the few who lead well. I just needed a change and thought denominational staff work would be right for me, but now I miss the local church. I hate all the meetings I must attend, plus the grind of the travel, and want to be back where action is constant and under my leadership.”

I coached many of these people over the years. I would typically recommend that they stay in denominational work until around their third anniversary. If by that time they have not figured out that God really did call them into denominational work, then they ought to do themselves and everyone a great favor and go back into local church work. Three years seems to be the sweet spot for doing this.

Do you know anyone who has gone into denominational work and within three years was back in a congregation? I suspect you do. Even top leaders of denominational organizations do this.

I remember many years ago a prominent pastor accepted a regional denominational staff role. I knew him well, and I knew well the person who was his supervisor. I remarked to several colleagues that my friend and his supervisor were an irresistible object and an unmovable force. They would either team-up and become a force to be reckoned with, or my friend would be ready to go back to a church pastorate within 18 months and would ask people like me to help him find a church.

The first time I saw my friend I told him my prediction. About 18 months into his tenure he was attending a meeting I was leading. He called out to me and said, “You remember what you said to me last time we were together?” I did, I told him. “Well, its time.” Several months later he left his denominational role to serve a church as pastor.

Some years later he accepted a denominational staff role again. But, this time he knew why. The call of God was obvious and impactful upon his life and ministry. He then served for many years with great joy and enthusiasm.

The difference between not called and called has a phenomenal impact of the ability to serve in an empowering manner in denominational staff roles.

Rejoice! God is at Work During the Pandemic

Worship Wars Are About Distance Not Style

Future Church Moments from Will Mancini and Cory Hartman