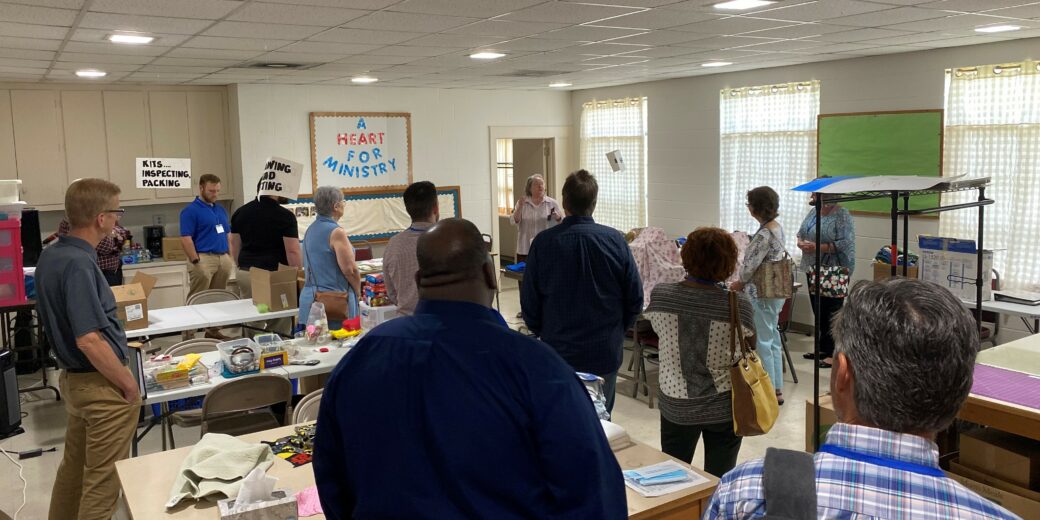 The CMBA family of churches has quite a history together. During a recent Visionary Leadership Community (VLC) meeting held at Belmont Baptist, the connection was made that the church was originally a mission of Eau Claire Baptist in the 1950’s and sponsored Cedar Creek Baptist in 1979. Partnership, church planting, missions and community engagement have always been a part of Belmont’s story, and continue to be.

“Belmont is a great example that a church of any size can be on mission. Their missions involvement – person-to-person – exhibits a higher capacity for Kingdom ministry than much larger churches. I commend them for their commitment to Christian ministry,” says CMBA Executive Director George Bullard.

In addition to hosting CMBA’s food pantry, Belmont served as the first host church for the VLC’s monthly meeting following the decision for CMBA to transition to virtual operations. Pastor Brenda Kneece along with about 10 members of Belmont shared about how God is still at work through the smaller membership church. With 20 folks present for Sunday worship on a good day, the congregation has a big heart for missions and has recently agreed to be a location partner for City of Refuge Church, a church plant led by Pastor JayWill Wilson.

“Belmont will work with any Christian church that will work with us. I am excited that now, through the work of CMBA, we are moving forward to host City of Refuge that is focused on reaching our community,” Kneece says.

“We’re very excited about what the Lord is doing in the Eau Claire community. We’ve been prayer walking in the area and getting to know the neighborhood. There are a lot of opportunities for the gospel to advance in the community and many in the neighborhood have been very receptive to us praying with them. This partnership with Belmont feels like a new story being written for our community and a future glory to be revealed in Eau Claire,” says Wilson.

This new chapter in Belmont’s story joins a history of faithful missions involvement and community ministry. From the days of seeing 700 or more in Sunday worship in the 1970’s to welcoming African American neighbors into membership, the congregation has forged its own path in Kingdom work. Kneece describes Belmont as a “white-founded, non-segregated Baptist church. Their faithfulness has rewarded them with deep, varied relationships that reach across racial and cultural boundaries.”

Like many churches located in a changing community, Belmont lost many members over the years who moved to other zip codes and has struggled to meaningfully engage its new neighbors. Within 20 years’ time, the congregation went from being able to build state-of-the-art facilities to reducing staff members. Despite the reality that more than half of the church’s adult leadership has died within the last 15 years, Kneece says God can still be found in their midst.

“The years have taken from us numbers of bodies and our able-bodiedness. What the years can’t take is a commitment and love for God. We feel like we’re doing what God reveals to us as avenues to walk faithfully and see each other home,” Kneece says, adding that the congregation continues to pivot with what ministries it offers the community based on membership abilities.

More than 10 years ago a seamstress taught some of the Belmont women to crochet, and they began to send caps, scarves and gloves to the Seaman’s Ministry in Charleston and to Appalachian children and families through other Baptist connections. This vision was expanded when a member of another Midlands church introduced the ladies to a ministry that made clothing and hygiene products for villages in Africa. Kneece says a sewing ministry has grown out of the group’s excitement, with Belmont’s women teaching others how to sew using shared patterns to make the items necessary for children to attend school and sanitation products that are empowering women and young girls.

“This was an idea that Belmont women had. It is a current, real-world spreading of the love and grace of Jesus,” Kneece says of the international outreach.

Belmont has repurposed one of the rooms on campus to house sewing machines and supplies and is where the missions group meets for meetings and prayer times. In recent years they have invited others to become involved, including Denny Terrace’s Woman’s Missionary Union, Sisters of the Heart, and members of African Methodist Episcopal and Baptist Educational and Missionary churches. Another woman, who grew up at Bethel Baptist in Monetta, has donated bolts of material and brought boxes of finished items.

Bringing the spirit of partnership closer to home, Belmont has participated in

joint seasonal worship services with other community churches for several years. It also volunteered to host the North 21 Terrace Homeowners Association for its meetings and some community wide meals. Kneece says hosting CMBA’s food pantry has enabled them to meet food needs while providing a real connection with the association.

“Our members actively participate in the food pantry. We collect two times a year and often fill three to four buggies, which is a lot from about 10 families here with several of these being single,” she adds.

Even in difficult seasons of Belmont’s church life and ministry, Kneece says God is “always at work. If I don’t see it, it’s not that the evidence isn’t there. It’s that I don’t see it. I do see it in the movement of the Spirit in the face of overwhelming odds among the people. Choosing to make an extreme change in faithfulness is evidence that their spirits are in touch with the Spirit of God in that place.”

A Wednesday Word from George Bullard for June 23, 2021

A Wednesday Word from George Bullard for June 16, 2021