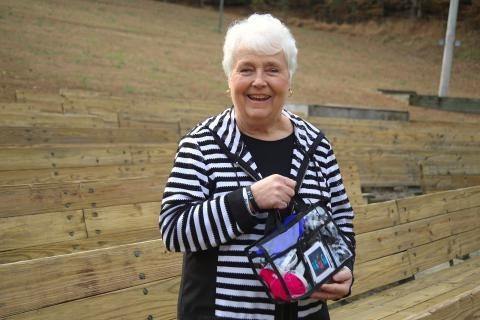 A Sisters Who Care Article from Richmond, VA

(By National WMU on May 24, 2019 – written by Trennis Henderson, WMU National Correspondent with pictures by Pat Henderson)

RICHMOND, Va.—This isn’t your typical WMU ministry project. A small group of volunteers gathers two nights a month in south Richmond, Va., to walk a mile-long strip of the city and minister to prostitutes and others they cross paths with along the way.

The volunteers meet in the parking lot of a nearby fast-food restaurant about 11 p.m. for a brief time of orientation and prayer before heading out two by two along a street dotted with aging motels, used car lots and the occasional pawnshop or tattoo parlor.

Usually spending 90 minutes or so strolling along the route, team members pause frequently to pray specifically for the women and men on the streets and for the neighborhood in general.

On a recent night, one of the ministry volunteers noted that a shooting had been reported in the area earlier in the evening. A few blocks later, group members saw several police cars and an ambulance parked in front of one of the motels. Rather than deter the team, one of them stopped to pray for those involved, including praying for the motel manager by name.

Valerie Carter Smith, executive director of Woman’s Missionary Union of Virginia, organized the streetwalking ministry more than a decade ago while she was serving on staff in a local congregation. Pat Eggleston joined the ministry effort a few years later, helping coordinate and lead the volunteer ministry.

A soft-spoken, white-haired grandmother of eight, Pat doesn’t match the image of someone who would be walking the streets of Richmond’s prostitution zone at midnight or 1 a.m. But she sees that as an advantage.

“It’s obvious that I have a few years behind me. I would just say age is sometimes a wonderful opportunity,” she remarked. “I’m obviously someone’s grandmother and I’m able to approach people in that manner. Often there are people who think I’m too old to do certain things but we have to use the advantages we have. God has given old age a real advantage and I believe we have to use that.”

As the ministry volunteers strike up conversations with young women and young men they pass on the streets, “we just meet them where they are,” Pat noted. She said they seek to convey a sense of personal dignity and self-worth to those struggling amid difficult circumstances and choices.

“This is a very unscripted opportunity. Each person injects his or her own personality based on just how the Spirit leads us and the person we encounter,” she said. “My intro is usually, ‘Hi, how are you tonight? Are you safe? We’re from the church and we’d just like to take a minute and speak with you. Is there something we can pray with you about?’”

While the volunteers watch for signs of individuals being trafficked, “most of the young people we meet here are substance abusers,” Pat said. “Most of them are here because of their drug addiction and they are prostituting to make the money.

“Our goal is to be salt and light to a dark world,” she emphasized. “It’s a very dangerous lifestyle. We go there and just casually meet people, we talk to them, we offer prayer. Our goal is to just offer them hope, offer resources.”

Explaining that “so many of these young people really want out,” Pat quickly added, “They didn’t want in to begin with. Many are searching for a way out.

“We don’t go and chastise anyone,” she said. “We’re not there to pass judgment or offer correction. We are there to just lift them in prayer and love them, take their hands, hug them, whatever opportunity comes to us.”

Serving in a Dark, Dangerous Place

Recounting one painful memory of ministering in such a harsh setting, Pat described her final visit with a young man she had gotten to know. She said she pulled her car over, rolled down the window and asked, “Are you okay tonight?” His response was, “Just pray for me.” Two weeks later, Pat said, he was murdered.

“It’s a very dark place. It’s very dangerous,” she reiterated. “But we love them, we love the folks we meet. They’re looking for hope. … I feel like our witness is through what they hear us pray. We’re not going to lecture them but when they hear us pray for them and lift them to the Lord, we hope that puts hope in their heart and that they feel the grace of God and the grace and love that we offer them.”

How does serving in that environment mesh with National WMU’s goal of “making disciples of Jesus who live on mission”?

“I just see WMU as being about people – people locally and around the world,” Pat said. “It’s an incredible organization that I believe has contributed to changing the world. We haven’t changed as much as some of us would like yet but we’re moving in that direction with passion.”

“It doesn’t leave the DNA of WMU at all. It doesn’t deviate,” Valerie agreed. She said the streetwalking ministry is a practical, hands-on example of “mission involvement or what we used to call mission action before that, mobilizing and inspiring the church to be involved.”

As sirens wailed in the background, Valerie paused to greet a young woman on the street, “Hey, Sweetie, how you doing?” she asked. “Be careful, okay?”

As the woman continued on her way, Valerie explained, “We pray for what we call divine appointments, asking, ‘God, who do you have us to share with?’ They don’t have to be those caught in prostitution. We talk to anyone that we pass.

“The significance rests in the parables in the Gospels of the lost sheep, the lost son and the lost coin,” she pointed out. “Our purpose is to share Jesus with people who are caught. These girls make one bad decision or something happened to them that took them further than they wanted to go and getting back is a whole ‘nother story.”

Among their ministry tools, volunteers hand out gloves in the winter and bottles of water in the summer. They also distribute small brochures that pose the question: “Do you want out?” The discreet pamphlets provide hotline numbers for such resources as counseling, 12-step recovery programs, transitional housing and an emergency shelter as well as Valerie’s personal contact information.

“If they call my number, I follow them all the way. I don’t let them go,” Valerie affirmed. Noting that she updates volunteers and other WMU members about the needs and victories along the way, she added, “I’ve seen girls recover from drugs and prostitution because WMU ladies prayed for them.”

Sharing Good News in the Trenches

While such tangible results as professions of faith, rescuing underage girls from the streets or helping drug addicts get into treatment facilities have been limited over the years, Valerie said, “God spoke and said, ‘Your call is to be in the trenches, to be light in darkness, to be obedient to that.’ This is my calling. I’m just here to share the good news of the gospel of Jesus Christ.”

Pat agreed that the motivation is not based on visible results. “It’s a ministry where you have to be satisfied that you don’t know if you made a difference,” she said. “You have to be able to know that I may never see this person again, but I have two or three minutes, maybe, to love them, to put something in their heart encouraging.

“I believe we are planting a seed. We see ourselves as often the first responders,” she shared. “We love them, we pray with them, we pray for them and pray that God puts another person in their path.

“We’re just part of a series of contacts because it’s such a brief encounter. That’s not comfortable for everybody,” she acknowledged. “We’re sort of results-oriented people so you have to be satisfied with that. You do your part and then God takes care of the rest.”

For Pat Eggleston, Valerie Carter Smith and other volunteers, that means faithfully shining the light of hope and love even on Richmond’s darkest street corners.

A Wednesday Word from George Bullard for September 8, 2021