As the spread of COVID-19 and its related shutdowns began occurring in mid-March, churches were forced to make operational decisions in rapid-fire succession. Churches with an existing online presence were a step ahead in transitioning to virtual worship experiences. Others were thrown into a steep learning curve of technology and social media platforms. Now more CMBA churches are embracing opportunities they had not considered before to creatively reach members, virtual visitors, and the surrounding community with the Gospel.

“I believe this a door that God has opened for His church. You don’t have to be a mega church or have young people who know the technology, you basically can do this with a phone which is technology that everyone has. As long as it’s organized, looks good on camera and we preach the Word, then we’re fulfilling the mission God has intended for us to fulfill,” says Woodfield Park Pastor Jeff Phillips. 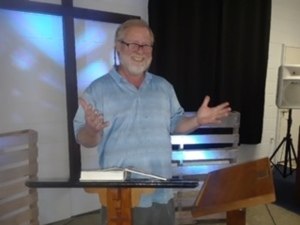 This Columbia church had moved Wednesday night services to Wednesday mornings last fall and had been streaming Sunday services for about six weeks prior to the stay-at-home orders going into effect. Both decisions allowed Woodfield Park to focus on fine tuning its online presence which involved watching other live stream services and making some adjustments.

“I had never thought of viewing things through a camera lens, considering how things look or need to look. We have modified our service length, taking into account the attention span of the viewers, and we stream it on Saturday instead of Sunday. We are slowly upgrading and improving every week.”

Woodfield Park streams services without cost on Facebook and YouTube and receives viewer data from both platforms that reflects they are reaching 10-times the number of people who normally attend live worship services. The church has added an online giving link to its website and increased its social media presence. This new virtual community presence is already manifesting in exciting ways. Phillips says the church has ministered to people through food distribution and baptized four people since March.

“Through the power of the internet, there is not a church in the world that can’t do international missions right from their building. In four weeks, Woodfield Park moved forward in technical ways farther and faster than we had in nine years. We will continue to share services online, improve our online presence and improve what people will experience when we come back together to worship.”

Harmony Baptist in Elgin had about 50 people attend worship in the sanctuary on March 15, its last live service. Reliable internet access can be a challenge for rural churches and proved to be an issue in the following weeks that Pastor Dan Griffin tried live streaming services through Facebook. Members missed portions of the service if internet access was interrupted, so Dan decided to purchase a monthly subscription with a streaming service which has improved the process. He says pre-recording the services helps to simplify how they are shared on the church’s website and Facebook page, and it’s allowed more Harmony Baptist staff and church members to participate in the order of worship through welcomes, personal testimonies and prayers that they record and share with Griffin.

“Easter Sunday, we uploaded a video lesson from a Sunday School teacher that was recorded inside of their church classroom. Normally 10-12 people attend that teacher’s class and, so far, at least 100 people have viewed the video,” says Griffin, adding the church may continue to provide small group lessons this way.

In mid-April, Harmony started a YouTube channel as an additional sharing platform and one person has recorded the services on a DVD to share with a member without a computer. The church has also worked with The Baptist Foundation of South Carolina to add an online giving link. Despite not being able to assemble in person, technology is allowing Harmony Baptist to reach more people right now than it normally does.

“Any church that has an eighth grader has all they need to have a virtual worship presence. If you have a student, or someone with an iPhone and access to Wi-Fi, they can do this,” Griffin says.

Beyond technology, social distancing has affected other normal work and procedures of CMBA churches. One of the earliest barriers emerged as churches considered applying for the Paycheck Protection Program (PPP) through the CARES Act. Church bylaws govern the process of how and when certain decisions can be made and, in many cases, prevented churches from meeting the federal application deadline.

North Trenholm Baptist’s bylaws allowed the senior pastor and elder body to hold a “special called meeting,” which they did on April 15, 2020, for the purposes of voting on applying for the PPP. To adhere to the governor’s social distancing guidelines, the church held a drive-through vote in the parking lot. While remaining in their vehicles, church members were given a ballot by an official agent of the church and then placed their completed ballot in an official ballot box. Pastor Casey Williams reports that more than 200 members attended the meeting. 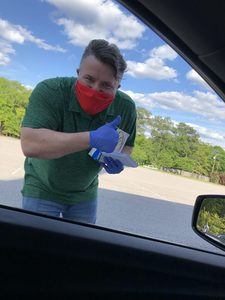 Concord Fellowship Baptist also used the drive-in concept to hold two half-hour services on Easter Sunday. Lead Deacon John Kinloch and Missions and Outreach Coordinator Michelle Raven planned the morning services where members remained in their vehicles as they worshipped in the parking lot. Deacons managed the flow of traffic and collected the offering as worshippers exited. The church promoted the services through social media and the church newsletter and welcomed the first four cars of visitors with a $25 gift card. The concept was so successful that future drive-in services are planned for the first Sunday of each month.

Concord Fellowship has also been creative in engaging in ministry opportunities. Ministers and deacons connect with members weekly, 15-minute phone prayer times are conducted by ministers, deacons and other members throughout the week, and Pastor Andre Rogers and other ministers record short sermons that are distributed to members and added to daily Facebook posts. The church is focusing on staying connected and continuing to encourage members in their personal growth.

Sharing from his heart, Rogers says, “I know there are so many business owners and others who are unemployed and struggling right now. As a church it gives us a unique challenge to get outside the walls and love others. I realize there is a lot of human suffering – but that is when the Church is at Her best.”