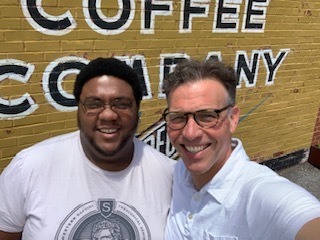 Riverside Community Church, located on Divine Street in the Shandon area near Five Points, has joined the CMBA as a Church Network Connection and has been accepted by the Visionary Leadership Community. This partnering body of believers has been building relationships across denominational lines in the Capital City for about 10 years, growing small groups and planting churches. Pastor James Walden and his church look forward to working alongside CMBA churches to reach the lost and unchurched.

“We have a vision for church cooperation, which is one of the reasons we joined CMBA. If we believe the same gospel and are preaching the same gospel, we should work together. When George Bullard reached out to us to see how we could partner together we recognized he represented a contingent of other local Baptist churches. In making this Church Network Connection we simply named the partnership that already existed,” James explains.

Riverside Community is an Evangelical Free Church of America congregation and James serves as a local coordinator of the Acts 29 Church Planting Network. As “one church of many small groups,” their vision is to live out the gospel with one another through community. James describes his congregation as primarily young families, with children making up one-third of its population. The church founded a Faith and Scholarship Society small group for university students that engages faculty and other students from the University of South Carolina. Often existing small groups intentionally meet during downtown art events to engage the arts community.

“Small groups are key for us to express our covenanted value of doing life together and we are a church that plants churches,” James says.

That heart for church planting is the reason Riverside Community pursues local connections to help provide support and leadership coaching. As area coordinator with the Acts 29 Network, James functions as a resource hub for new and existing planters in the region. Each year he hosts several leadership meetings called Carolina Greenhouse, where a cohort of Acts 29 church planters gather with other local church planters and leaders, hear from a topical speaker, and enjoy lunch together. Guests are invited and James says meeting details are always announced on Facebook.

“It’s a two-fold idea as we think missionally to plant new work and shepherd existing planters. Carolina Greenhouse topics center around head/heart/hands issues, and we connect them to each other which is a Kingdom unity piece. A lot of leaders are lonely and disconnected, so if they can connect with other guys it is enormously helpful to have longevity in ministry,” he says.

In 2014 Riverside Community Church started a church planting residency through the Acts 29 Network, where the prospective planter commits to serving in a staff position at the church while they receive leadership and ministry training for 18 months. They gain experience in all areas of operations, go through the church’s elder training process, and learn to set up their core support team for future planting, among other things. The residency is rigorous, but James says the final assessment is designed to help the planter be as prepared as possible when they launch.

“The resident develops a prospectus, or church planting proposal, that includes the vision, how they’ll make disciples, the leadership pipeline and a detailed budget. The experience helps them grow emotionally, in self-awareness, learn how to stay spiritually healthy and lead others to be healthy. The goal is that by the end they’ve also developed a core team who go with them to help plant the church,” James says.

Riverside Community Church is passionate about reaching urban poor and underprivileged communities. One small group began building relationships in Allen Benedict Court, before it was evacuated in 2019 following a deadly gas leak. Riverside Community Church has begun focusing ministry efforts on the Eau Claire community, where current Church Planting Resident JayWill Wilson is preparing to launch a new church in the coming months.

JayWill never thought he’d be a church planter. When he moved to Eau Claire about eight years ago he regularly shared his faith, did outreach, and encouraged people to get plugged into a local church. He was also pursuing his dream of becoming a professional Christian rapper.

“I honestly didn’t want to live in Eau Claire. We were told it was a community you didn’t want to live in, but it was the only place we could afford at the time. We found an apartment and started meeting neighbors and building relationships. God started breaking my heart for them, and I realized that local churches weren’t made up of people that lived in the neighborhood. After months of praying we felt like God told us, ‘why not bring church to them,’” JayWill recalls.

For decades Eau Claire has been a casualty of the effects of racial and socioeconomic divides and now JayWill is focusing on all of the residents’ needs, including for a true community church. During COVID-19 closures he and his family have continued to communicate with friends and neighbors, partnered with the school district to deliver food to local students and have helped connect residents to medical assistance. Like other ministries, JayWill says planting a church during a pandemic is uncharted territory.

“It’s difficult to reach new people, since a lot of them are reluctant to Zoom or join video chats. Digital ministry isn’t the best way in an urban context, we are a touch-based ministry. So we are thinking through how to serve while keeping our families and core group safe,” he says.

This June JayWill will complete one year of his residency with Riverside Community. City of Refuge Church will be an Acts 29 and South Carolina Baptist Convention church plant that anticipates beginning services later this fall and officially launching in March 2021. JayWill says his experience as a church planting apprentice has prepared him well for his next steps.

“Riverside has given me the opportunity to see what it’s like to work alongside a team of people who are really dedicated to the mission and who believe in the plurality of leadership. They’ve poured into me about thinking through the big questions to answer before I do anything like the desires of the people, or anyone you minister to, and how the gospel responds to that,” he says.

JayWill has made a few surprise discoveries along the way, like the realization that going into the ministry can be isolating and means he will have to work harder to find and build relationships with unchurched people. “Also, ministry is a learn-on-the-job experience. You don’t know how unprepared you are until you get into it, but also you don’t know how prepared you actually are,” he says with a laugh.

Partnership is in the DNA of City of Refuge Church. JayWill has worked to develop relationships for fundraising and support, with many connections coming through Riverside Community. JayWill sees the CMBA as another strong element of his church plant.

“Having no ministry background I had fewer connections going into this, but God has strategically placed people to vouch for me. That has been a huge blessing. As a Baptist church and a part of the SCBC and CMBA I will have like-minded people to partner with,” JayWill says.

Today JayWill says he’s seeing God move while he practices patience, because “the Lord builds His church. Even though we aren’t able to physically gather right now, we’re seeing His people grow. I am also seeing a push for a people in our core group to fall in love with the neighborhood and be intentionally involved in community. If things were more normal it would have been easy to say we’ll ‘do that one day,’ but it’s become ‘we have to do it now.’”

For his part, James says “JayWill loves people. He enjoys being around others and he’s bold with the gospel. His heart is to engage his neighbors in Eau Claire and build a church home for new believers.”