Baptist Associations are a Family Heritage 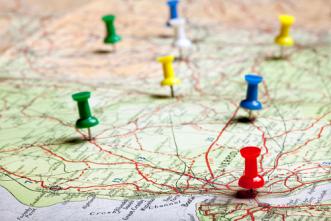 For my family, Baptist associations have been part of our DNA since at least the 1940s. I suspect it goes back even farther.

Several weeks ago I was organizing my home office and aggressively throwing out things I no longer need that have piled up over the past 11 years. I came across a couple of boxes of family archives. Much of one box were various papers from my father. As I anticipated beginning as the director of missions for the Columbia Metro Baptist Association, I had a good time reading through some of the papers and remembering my family commitment to Baptist associations.

From stories told by my parents, I suspect it was through associational meetings in Wilmington, NC where my parents met in the 1930s. Beyond these gatherings, Dad would preach at churches who needed someone to fill in, and often he would take Mom to play the piano. Not a bad way to court one another.

My father did not attend seminary until he was 30 years old. He loaded up Mom and my two older sisters, and went to Fort Worth, TX where he and Mom did a two-year certificate program. Neither had a college degree. To do this Dad had to resign from a church where he was serving as pastor.

Following seminary they moved back to North Carolina for Dad to serve as associational missionary for the Roanoke Baptist Association in Rocky Mount. He served there three years before going on the staff of the regional denomination known as the Baptist State Convention of North Carolina.

Within a couple of years he was asked to take a new position to serve as the statewide director of associational missions work. That same year Southern Baptists in Alabama named someone to a similar position. They were the first two regional denominational staff to hold such a position.

This happened before I was born. When I was born I started learning in my home not only about God and church, but also associations. Much of what I know about associations I learned without realizing I was learning it. This happened even as my father transitioned to serve once again as a church pastor.

After 15 years as a pastor, my father became the associational director of missions for the Delaware Valley Baptist Association which was southeastern Pennsylvania and Southern New Jersey. My observation as a teenager and young adult was that these seven years were the most satisfying and fulfilling of anything my father ever did in ministry.

Some years later when my father retired—his second time—he and mother moved to South Carolina about 100 miles from me, but just a couple of miles from one of my sisters. While in this second retirement he served as the interim associational director of missions for the Greenville (SC) Baptist Association. One day he told me he had discovered numerous things that needed to happen to upgrade the association for ministry in the latter part of the 20th century.

Baptist associations are part of my DNA. A spiritual call to serve in this role is a natural progression for me if you only consider what I learned from my father. But there is more . . .

Seven Facts About Congregational Multiplication in the Columbia Metro Baptist Association of 100 Congregations in Richland, Fairfield, and Kershaw Counties 

Four Questions for Your Congregation about Unleashing FutureStories