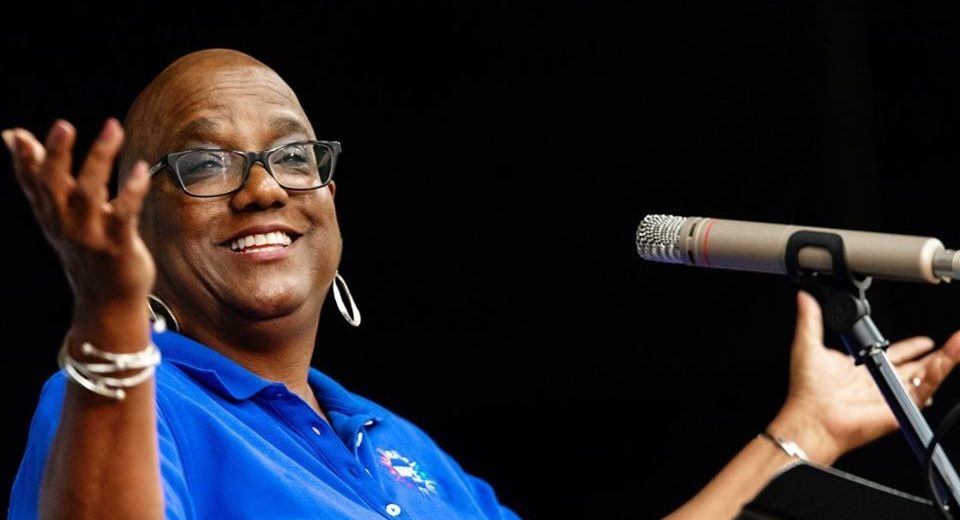 Valerie Carter Smith grew up in a middle-class Long Island family. The day her father unexpectedly abandoned the family changed the course of their lives forever, ushering in years of financial and emotional struggles and damaging effects from her mother’s lifestyle which included drug use. At the age of eight Valerie took on a protective role for her younger brother and managed to survive experiences that God would later use to empower her ministry. She is still excited to describe the moment she was invited to follow Jesus.

“I was a miserable child, confused. When I was nine years old and finally understood what was going on in our house, I confronted my mother. I left the house and walked a mile down the road and right into a church, where I heard a youth choir singing. At 2:45 p.m. that day I accepted Christ. Someone gave me a ride home, and I was so excited I began to tell everyone that I was saved. The world looked so beautiful and at that moment I had forgotten what had happened at my house that morning,” she says.

Valerie continued to go to that church, attending all-day Sunday services and many other times during the week. She says church became her life, a literal sanctuary place. Church members began treating Valerie like family and discipled her. When she was at home or at school, she instinctively told everyone what she’d heard the pastor preach that week.

Her family life grew harder and more abusive over the next few years, a time she says was full of almost daily confrontation surrounding her faith and that eventually led to her mother putting her out on the streets at age 15. Valerie persevered through the next few years as an emancipated minor by working multiple jobs that paid her rent and working so hard in school that she was accepted into multiple places of higher education such as Syracuse University. Her testimony includes the challenges she faced during that time which ultimately resulted in God revealing His professional plans for her.

“I wanted to study social work, because I knew church and welfare workers in terms of role models,” Valerie recalls.

Working multiple jobs took its toll and caused Valerie to be eligible for dismissal from Adelphi University but asked for one more semester. She says God delivered her by revealing her strongest areas of study through her transcript, and she registered for classes in religion and sociology to improve her grades. Today Valerie holds a bachelor’s degree in sociology, Master of Divinity from the School of Theology at Virginia Union University, a masters’ degree in sociology from Virginia Commonwealth University and a Doctor of Ministry degree from Baptist Theological Seminary at Richmond. For the last 22 years she has also used her passion for education by teaching at a community college.

“I love teaching because I can do more witnessing there. I share my testimony the first day of class as a means of explaining why I teach the way I do. I’m able to pray with students and have even given Bibles as they come to me outside of class for guidance. Teaching has been my mission field,” Valerie shares.

In her professional ministry, Valerie worked with the North American Mission Board for 10 years as director of Hillside Baptist Center which served an economically-deprived community. Valerie calls that time her “best ministry ever.” She went on to serve five years as an associate for Christian social ministries with the Woman’s Missionary Union of Virginia (WMUV) where she launched Christian Women’s Job Corps. God then led Valerie to accept a job as an associate pastor at Bon Air Baptist Church where she was responsible for glocal (global/local) ministries in a congregation that represented “people of all nations, tribes and tongues.”

In 2014, Valerie was called as the ninth Executive Director/Treasurer of the WMU of Virginia of the Baptist General Association of Virginia, and the first African American to hold that position. She is passionate about championing all women as they look for opportunities to make a relevant hands-on impact around the world.

Personally, Valerie met and married a pastor right out of seminary and the couple went on to have two boys. They served two churches in the Richmond, Virginia area and were married for 23 years before his unexpected death in 2007. God continued to write her story through a new relationship with Eldridge Smith, a man she formerly discipled through the Hillside Baptist Center. Valerie recalls him saying, “I prayed for a wife and it is you.” The two were married in 2018, and today the couple ministers to women and men involved in the sex industry.

“I started this ministry in my depression while I was grief-stricken following the death of my first husband. Another church member and I would go into prostitution areas to meet women where they were. I believe that on Sunday mornings or in some small group that someone is testifying about ministry that happened along the way in their life,” Valerie shares, adding that another constant in her life has been the choice to live in low income neighborhoods in order to place herself in the midst of the mission field.

The Columbia Metro Baptist Association (CMBA) has invited Valerie to be a keynote speaker in the 2019 Martin Luther King, Jr., Day Worship and Celebration slated for January 20 at Temple Zion Baptist Church. Her presence is particularly fitting as WMU has recently been relaunched in the association and because of a new emphasis to engage African-American women across the Midlands through Sisters Who Care. Valerie has been a proponent of Sisters Who Care and believes the relabeled WMU ministry can engage an untapped community of believers who long to serve.

“Sisters Who Care provides framework for African American women to engage WMU on their own terms and in own language. We are sisters and brothers in local congregations, so now we’re sisters who care in community and around the world. It’s still Women on Mission but in language and context, and it affirms the unique complexes of the African American church,” Valerie explains.

Cathy Locklear is the CMBA staff consultant for WMU and says she’s excited about the missions opportunity Sisters Who Care can provide to Midlands churches. “WMU has expanded its touch over the past few years and I am encouraged by this. All women can find a place in WMU, and I look forward to working with women’s missions in 2020,” she says.

“African-American women can develop their leadership skills in Christian ministry through Sisters Who Care. They’re feeling affirmed and given ‘permission’ to go where the wind of the Spirit is blowing in their lives, and they’re being supported in that. I see God moving and once they grab hold of a tried-and-true framework of missions, which is WMU, they’re owning it. They are finding their voice and connecting cross-culturally as well,” Valerie says.

“South Carolina WMU is excited about Valerie coming to Columbia Metro in January. Valerie will bring a wealth of knowledge about Sisters Who Care, and ways women and churches can be more involved in missions. We will also be blessed to have Valerie with us for our SC WMU Missions Encounter and Annual Meeting on March 27-28 in Greenwood,” says SC WMU Adults and Growth Associate Donna Britt, who has previously worked with Valerie and calls her a friend.

“WMU is about the witness of women. I love telling WMU ladies that they’re unsung heroes – a lot of things they’ve done go unheard of because they are often behind the scenes at churches. The masses may not know it, and that’s ok because it’s kingdom work. How is God calling you to pray, give and go,” Valerie asks.

For more online information about the January 20 event, visit www.columbiametro.org, or contact Cathy Locklear at 803.622.0303 or CathyLocklear@ColumbiaMetro.org

A Wednesday Word from George Bullard for September 8, 2021