Since becoming senior pastor at First Baptist Church, Columbia, in August 2018, Wes Church has taken a Baptist history class. After 17 years on the church staff as College Minister and as Minister of Discipleship, Wes knew that First Baptist was a historic congregation in both Southern Baptist life and South Carolina history, but what he learned caused him to pause.

“In the first paragraph about Southern Baptist history, two or three of the early pastors of First Baptist Church were mentioned by name,” he says. “The historical significance of this church in Baptist life came home to me. Every pastor everywhere stands on some pretty tall shoulders, but here they might be just a little bit taller because of the church’s role in history.” 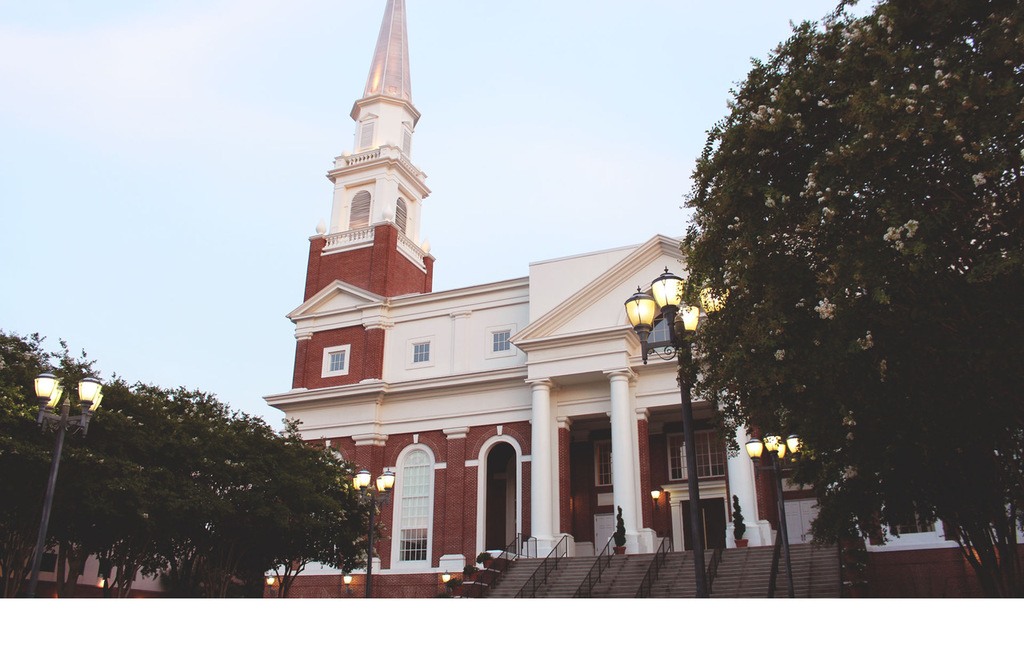 In 1860, as Columbia’s largest possible meeting facility, First Baptist was chosen by the legislature as the site of the Secession Congress meeting, where state leaders voted 159-0 to secede from the Union. This move began the South’s secession movement toward what became the American Civil War. After the war, delegates returned to repeal the Ordinance of Secession.

“With all that history,” Wes says, “it could be tough for the church to move beyond the past, but First Baptist Church has always been and still is a forward-thinking church. As church leaders, what I hope we do is value our distinctives – like our history – and determine how we can leverage who we are in our efforts to carry the gospel into our community and beyond.”

Beyond the history that still calls First Baptist Church to be a leader in Columbia, the metro area, the state, the nation, and the world, Wes says other distinctives include being a downtown church and a multi-generational church that reaches a large region.

“First Baptist Church is blocks from the University of South Carolina,” he says. “We are one block off Main Street. For the past 50 years, we’ve watched everyone leave downtown for the suburbs, but what’s starting to happen is that people are moving back. For the first time in a long time, First Baptist Church has neighbors. We have college students, yes, but also professionals and retirees who are living downtown.

“As a multi-generational church, we are a church of and for all ages,” Wes says. “We have babies, and we have those in the 90s and every other demographic in between. Being in the city, our people come from all corners of the Midlands. People regularly join us from Chapin, from Pelion, and from Sumter. They call First Baptist ‘home,’ and they are active here.”

“So, how do we leverage all of that?” he asks. “We want to be a missional church, Biblically faithful, strong in Scripture, the presence of Christ in the community – not retreating from the community. We see ourselves as a downtown anchor, relating Christ to others, and building on our history in missions and church planting. We want to call our people to a spirit of volunteerism to help those in need at home, sharing Christ, but then also to be involved in church planting in the Send Cities of the North American Mission Board. Through its Send Network, the North American Mission Board of the Southern Baptist Convention has identified high population areas where church plants are needed.”

“I think when people think of a historic, downtown church, they think old and rich,” he says, laughing. “But, as long as I’ve been here, this church has embraced being friendly and hospitable. There is a culture here to make people feel welcome. It shows up in how we reach out to college students. It shows up in how we literally reach the world for Christ through local, international ministry. It shows up when we serve the hearing-impaired through Deaf Ministry, and through Special Needs Ministry. It shows up in how we respond to other churches with a willingness to help them. I’m constantly challenged by our history and the culture that comes with that, and that we overcome the stereotypes for the sake of the Gospel.”

As the former Minister of Discipleship at First Baptist Church, Wes has a heart for Sunday School, which he says First Baptist uses “to reach out and care for people. We want everyone connected to a Sunday School class.” But, he realizes that discipleship can’t happen in rows, but in “nooks and crannies, and so we strive to have fellowship groups within neighborhoods and among families. We have also learned to stay connected to people through social media, text-messaging, email and an online presence that makes the world smaller.” First Baptist’s live television broadcast of Sunday services has reached across the state for 60 years.

“Through television, we have a lot of people who watch us and then contact us,” Wes says. “We work to help people connect with local churches in their communities. More locally, when we have the Lord’s Supper, our homebound ministry will go into homes, watch services on television with people, and administer the Lord’s Supper.”

Wes says, “We hold onto things very loosely here. Our staff is kingdom-minded and loves to help other churches, especially internationals and ethnic churches. Through our senior adult ministry and music ministry, we’ve been able to provide groups that help other churches when needed. That church-to-church connection is very important to us and drives why we love the Columbia Metro Baptist Association.

“For us, the most important way that we stay connected with other churches is through our local association. It’s a platform on which we can develop and where we can support others. George Bullard (Director of Missions) is so committed to providing venues and opportunities for service. I’m thankful the association is thinking forward into the 21st Century, and our pledge is to be committed first to the association, then the state convention, and then to the national convention. How we reach those in our community, how we work together – that all happens through the association to reach our area with the Gospel.”