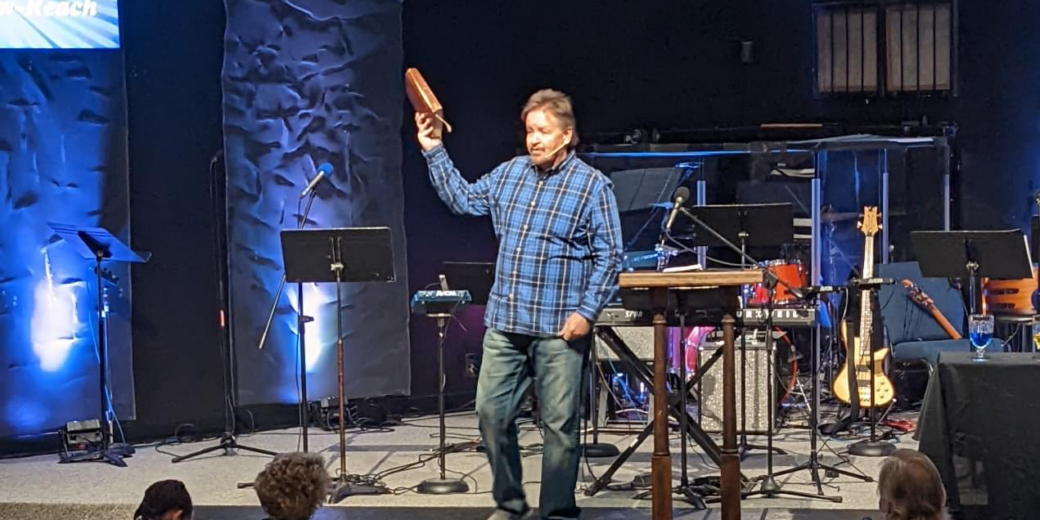 Freddy Johnson, pastor of North Point Community Church, serves CMBA as the 2022 Vice Moderator. In this role he also serves on the Visionary Leadership Community (VLC) which meets almost monthly to conduct CMBA business and share ministry updates from our Family of Church across the Midlands.

Raised in a Christian home in Hendersonville, N.C., Freddy decided as a teenager that he would not ‘embarrass God’ by pretending to be a Christian. His family was in the produce business which required them to split time living in North Carolina and Florida. He went on to have a successful career in the corporate world and was promoted to management in his early 20’s. To the outside world he had a great life, but Freddy recognized something was missing.

“I filled that void with the things of the world and kept running dry on that. One night in a bar, through the power of the Holy Spirit, Jesus came in and changed my life forever. I’ve been living for Him ever since,” Freddy says of his conversion experience.

In the years since, Freddy has served as a Billy Graham Evangelism Association consultant and on staff at several different churches across the Southeast, including as a single adult pastor at Shandon Baptist. He was called as pastor of North Point Community Church eight years ago.

“North Point is in its twenty-fourth year. I am only the second pastor to lead. We are a loving, welcoming church. While we hold strongly to conservative Biblical truths, we are philosophically open to trying new ways to reach people for Christ,” he says.

Freddy loves to share his faith and testimony and help people come to know Christ. Two years ago North Point was in the top ten percentile for number of baptisms among South Carolina Baptist Convention churches of similar size. That spirit of evangelism is still active, as Freddy shares “this past Sunday a young man asked how to become a Christian, I shared gospel and he prayed to receive Christ. We plan to baptize him this Sunday.”

Since becoming involved in CMBA in 2014, Freddy has served as a VLC member, Denominee Journey team member, vice chair of the state convention bylaws committee and worked with revitalizing CMBA churches. Freddy appreciates the association’s diversity and the openness of churches working together. He says it’s an exciting time to be a part of the CMBA.

“I don’t think I knew or realized the diversity that’s within the CMBA prior to serving in these roles. It’s been a passion of mine to try and bring people together and to have churches partnering together when possible. There appears to be a willingness within the association to cross racial lines and break down barriers of church territory. I like that we are trying to do things together, which seems to be especially true in our smaller churches,” he says.

Freddy shares a current collaboration his church has with Shandon Baptist to host a community single adult Bible study beginning Feb. 10 at North Point Community Church. This passion to reach all single adults – never-married, divorced and widowed – drives Freddy to consistently encourage churches to focus more time and ministry efforts on loving this important segment within their congregations. He is also a co-leader of a successful annual Labor Day singles conference held in the mountains of North Carolina.

Of his current pastoral ministry, Freddy says that “God called me to do this, and as far as I can tell He hasn’t released me yet. And when one person comes to know Jesus Christ as Lord and Savior and spend eternity with Christ, it makes it all worth it. I’ve never forgotten that Jesus loved me so much that He came into a bar and saved me one Saturday night.”

Freddy and his wife Helen have been married for 21 years. Their daughter Taylor is a senior studying at the University of South Carolina and daughter Bailey is 11 years old and in the sixth grade. Freddy’s love for basketball led him to travel internationally with the sport-related ministry Crossfire. Some interesting “fun facts” include that Freddy has preached on five continents and that he published his first book in July. Relentless Love is now available on Amazon.

The February VLC meeting will be held Feb. 15 at North Point Community Church. The next VLC spotlight will feature Cookie Adams, VLC clerk and member of Kilbourne Park Baptist, which will host the March meeting.