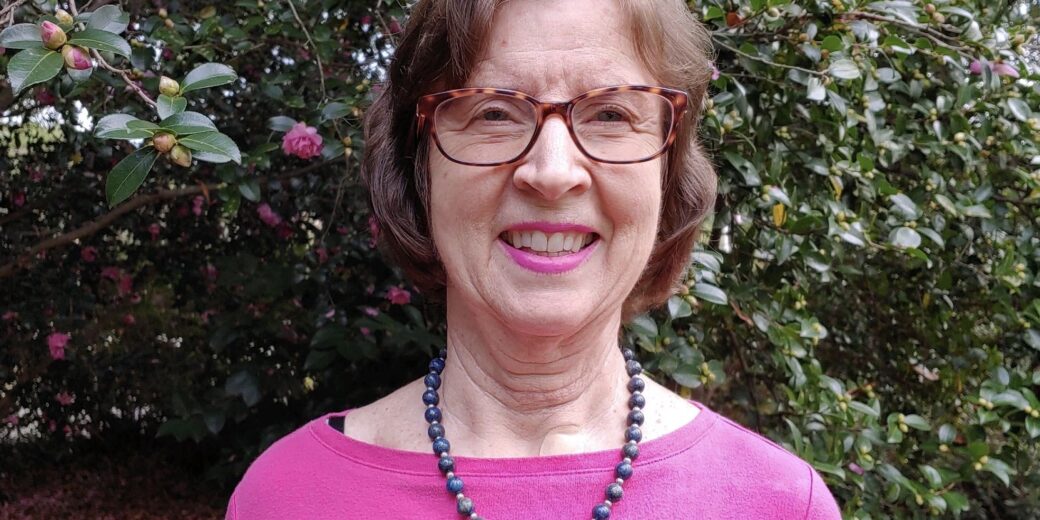 Cookie Adams, member of Kilbourne Park Baptist Church, serves CMBA as the 2022 Clerk. In this role she also serves on the Visionary Leadership Community (VLC) which meets almost monthly to conduct CMBA business and share ministry updates from our Family of Church across the Midlands.

A native of Kingstree, Cookie was born Cora Baker but has been called by her nickname since birth. She adds with a laugh, “no one really teased me about being ‘Cookie Baker’ until I was an adult!” Cookie had married her husband Hal by the time she graduated from Columbia College (they recently celebrated their 50th anniversary!) and went on to earn a master’s degree from the University of South Carolina. She taught mathematics at the high school level, in adult education and at Midlands Technical College until retiring around the time her first grandchild was born. The Adams have two adult daughters, Dottie and Alice, and five grandchildren – Luke (16), Clara (12), Sebastien (9), Callie (9) and Cooper (6).

The proud grandmother says her “all-time favorite thing to do is spend time with one or more of our five grandchildren.”

Cookie was raised as an active member of Kingstree United Methodist Church and then joined Kathwood Baptist in Columbia as a newlywed. “I was baptized by immersion as an adult,” she says. As a now more than 40-year member of Kilbourne Park, Cookie has a great perspective on the heritage the church has in its community. She currently serves as the WMU director, on the stewardship committee and chairs the missions ministries committee, which oversees the church’s Mission House.

“This is a real ministry of Kilbourne Park and it has been a joy for me to serve on the committee since the planning stages of turning the house on Kilbourne Road into a Mission House in 2005,” she explains.

Started in 1927, Kilbourne Park is approaching its 100th anniversary. It was begun by Annie Greene who has relatives still active in the church today. According to Cookie, Pastor Terry Smoak leads the traditional congregation with wonderful Bible teaching and she appreciates the way Minister of Music and Outreach Craig Duensing leads the church’s choir and a small orchestra during worship. She is especially thankful for a dedicated group of church prayer warriors.

“We have an Intercessory Prayer Ministry. Our church adopted an Unengaged, Unreached People Group in 2007. The group is now engaged and has some believers, but we are still praying for them,” she reports.

Kilbourne Park is facing challenges but God is clearly at work within the membership. Cookie says her church family is “very grateful to CMBA and to George Bullard in particular for leading and directing our church through a Spiritual Strategic Journey that started in the fall of 2020.” After committing to 75 days of prayer and discernment the congregation developed and affirmed its Future Story of Missional Ministry and a seven-year vision.

Cookie says she wants people to know that “CMBA has led our church through this. Our church congregation is excited about what the future holds for us.”

That appreciation for CMBA has prompted Cookie to serve at the associational level in many capacities over the years. She has been a part of the former Executive Board, now called Visionary Leadership Community, for several terms, including serving as chairman for one year and currently as clerk. She has filled the role of secretary on two Executive Director Search Teams, the first called George Bullard and she’s serving as an alternate for the current committee searching for the next executive director.

“I have really enjoyed my time with the CMBA. It is a community of churches, large and small, serving the Columbia area, working together, and helping each other. We can do so much more ministry and service for our Lord by working together,” Cookie says. “The Hunger Ministry and the new church plants, especially for different ethnic groups, are just two examples of our churches working together to build God’s kingdom. Since I am a member of a CMBA church, I am a part of this greater work.”

In her spare time Cookie enjoys traveling abroad including to France, where one of her daughters lived for a time. She is a baker – “I have won a red ribbon at the State Fair for my bread!” – and has a sour dough starter that is over 25 years old. Cookie also likes to spend time out in her yard especially planting flowers and trimming shrubbery but, “I do not mow the grass.”

The March VLC meeting will be held Mar. 15 at Kilbourne Park Baptist Church. The next VLC spotlight will feature Brenda Sheets, VLC treasurer and member of St. Andrews Baptist, which will host the April meeting.