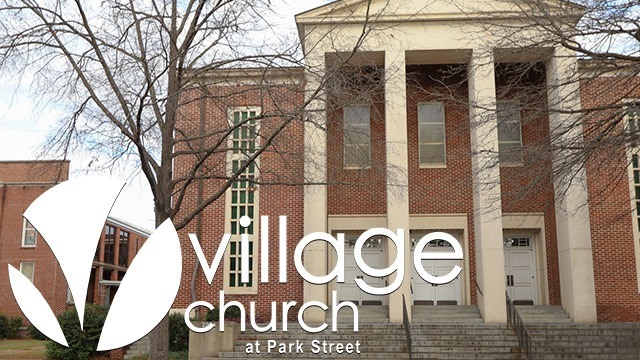 In January 2019, Erik Estep, senior pastor of Village Church in Blythewood, was in downtown Columbia – in the pouring rain. Making a hospital visit, he remembered his wife Emily, a Realtor, telling him about the gentrification of Columbia’s historic Elmwood Park neighborhood.

“It had been 30 years since I had driven in that neighborhood, and despite the rain, which was pouring down, I drove over to Elmwood,” Erik says. “There was the Park Street Baptist Church building. I parked and decided to brave the rain and go inside.”

“That rainy day visit to the Park Street location left me impressed with what a neat place it was there in a very nice community,” Erik says. “I was still thinking about it when George Bullard (executive director, Columbia Metro Association) came to our church in Blythewood. We were talking about first impressions that guests have when they visit us. I asked George about Park Street.”

George has written, recently, about his 45-year relationship with Park Street Baptist Church. While a graduate student at Southern Seminary in Louisville, KY in 1975, George first visited Park Street as part of a research project on the membership and attendance decline of churches in changing communities.

George says, “The pastor shared his perspective with me and became one of many pastors who, over the years, helped me formulate some of the principles of congregations who have lost their vision for a vital and vibrant future. They hoped for a miracle that would either restore past glory or provide them with a way forward.” Park Street’s decline continued for many years, and George continued to watch it when he served on staff at the South Carolina Baptist Convention during the 80s and 90s. During that time, he worked with the church to understand God’s future for it, but Park Street was unwilling to make necessary changes.

Fast forward to 2010. George says he tried once more to help the church through a process he created called the Strategic Spiritual Journey, but by this time, the decades-long church decline left it with too few leaders to take on the necessary transitions needed. When Erik Estep visited the church office that rainy day in January 2019, Sunday attendance had fallen to about 50. Facilities had deteriorated to a place that necessary maintenance was cost-prohibitive.

Yet, while the church continued its decline, the surrounding community became one of Columbia’s most desirable neighborhoods as waves of gentrification took place. “(The neighborhoods of) Elmwood, Earlewood, Cottontown, and the new Bull Street development offered many opportunities for new outreach and ministry,” George says.

When George and Erik spoke that day at Village Church, and the subject of Park Street came up, Erik says that George asked if “we would be interested in talking to Park Street leadership.” That opened the door for the first of three meetings.

“I met with them in February 2019 and just listened to their story and their heart,” Erik says. “The second meeting, they came out to Blythewood so that I could tell them about our church, and they could hear from me. When we met the third time, I said, ‘Park Street is your church, but if you want us to come to your property this is what Village Church will do.’”

Erik says the two congregations took five months to work through all the conversations and details, and Park Street eventually gathered with 30-35 members giving 75 percent approval to close their church and give their property over to Village Church for the purpose of launching a new campus—Village Church at Park Street.

“Financially and physically, they couldn’t sustain things,” Erik says. “But, to their credit, they said, ‘We want to see ministry continue here’ and they gave us their campus. It needed a lot of work. We had to close down to renovate. Our people scraped walls and painted. The electrical system had to be improved, we added new sound and light systems, cleaned the carpet, revitalized the fellowship hall, and carpeted rooms.”

“We had 60 of our members at Village Church sign on to be six-month missionaries to the Park Street campus,” Erik says. “At last week’s first service, we had 225 people there, including about 50 new people. We also had 10-15 people from the former church that came back. It was a great day.”

In preparation for the first service, Village Church members walked the neighborhood, delivering what Erik calls “Beans and Bones” – coffee beans and dog biscuits – as a way to create conversations and invite people to services.

“Our goal is to minister to this neighborhood,” Erik says. “It’s a historic, 1905 neighborhood, and we respect that. Through gentrification, there are a lot of families with young children and a lot of empty nesters. It’s a diverse neighborhood, and it’s an exciting place to be. I’m meeting with the neighborhood association in March because it’s a very active community, and we want them to know that our heart is to be a part of the community. I’ve also met with Columbia Mayor Steve Benjamin, who is a former resident there, and he’s provided great counsel on how we can be a good neighbor. We will measure our church’s success there based on how well we serve the community and reach and win the community.”

Erik says, “We have ideas for small group ministry there, and we will be very event-oriented as a way to invite people and reach them with the gospel. We are just getting started, and it’s very exciting.”