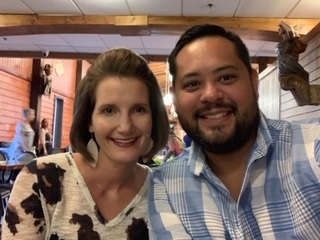 Union Baptist Church officially welcomed Luther Harmon as pastor in January and his installment service followed in early February. The Kershaw County church called Harmon after he served as pulpit supply, first last July and then more frequently as God allowed the two to develop a strong connection. The young pastor calls this new chapter an exciting one.

“I formally committed to answer the call to pastor on Christmas Day and was excited to call the chairman, who said it was a sort of Christmas gift to them. Union is a welcoming and loving church. You can tell their faith is genuine. My family and I are getting to know them, and that connectedness we are already experiencing has really carved out the way for us to see that God is working in this,” Harmon says.

A Tennessee native, Harmon graduated with a degree in Christian studies from North Greenville University then served churches in the Lexington area. He went on to New Orleans Baptist Theological Seminary to begin his Minister of Divinity studies and continued in youth ministry prior to serving as pastor of Earlewood Baptist Church in Columbia. Harmon and his wife Katie, currently a teacher at White Knoll Elementary School in Lexington, have two sons – seven-year-old Knox and Landon who is four. The active family enjoys spending time together on the water in local rivers and lakes, playing ball outside and traveling to the beach or mountains.

“Union Baptist is interested in welcoming younger families from the community into the church, and our family is a good fit for helping to do that,” Harmon adds.

The church is in a developing area of Elgin that is experiencing rapid growth. Its location is one of the things that excites Harmon as he seeks God’s direction for the church’s next steps. “We have felt loved and embraced and sense the genuine desire for this congregation to accept new leadership. This is a congregation that really does desire to seek all that God has planned for them,” he says.

Union Baptist Church members are active in a variety of local school ministries. Members fill backpacks for Sacks of Love, which provides food to children to take home at the end of the school week. The church opens its gym to a local middle school volleyball team for practices. It also has an international presence through a South American water filtration ministry.

“We are trying to focus on what the needs of the community are and determine how to equip ourselves to reach people and take care of those needs. I’m getting to know the community calendar so we can be more involved in new ways. I’m community-driven and Kingdom-minded,” Harmon says, adding that new opportunities include medical ministry and partnering with local churches for summer nights of praise events.

CMBA Our One Priority Mobilizer, David Waganer, worked with both Union Baptist and Harmon leading up to Harmon being called to pastor the church and he participated in Harmon’s installation as pastor. Waganer and Harmon developed a close relationship during this period as well, meeting over meals and communicating by phone and text messages. He notes Harmon’s strong love for the Lord and calling to pastor.

“In my role with the CMBA, I’m excited for both Union Baptist Church and for Luther and Katie Harmon and the way God has joined them together. Union Baptist Church is one of the older congregations in the association. The community around the church is growing and therefore there are a lot of people to reach. Luther really has a heart for reaching people and making a difference in the community where he serves. As Luther works with the church leaders to develop ministries to reach the community, the future looks bright,” Waganer says.

For his part, Harmon says he’s encouraged to have already seen a few new families recently join the church and that Union Baptist is welcoming new and regular visitors to worship.

“I’m excited about where the church is headed. We are laying a solid foundation and looking at opportunities that can help Union Baptist best meet needs within the church and in the surrounding community,” he says.

The previous pastor of Union was Jerry Lewis who along with his wife Wanda faithfully served the congregation. Union expressed its love and support for Jerry and Wanda through an extended health crisis Jerry experienced. Our family of churches in CMBA should continually support Jerry and Wanda with our prayers and presence.