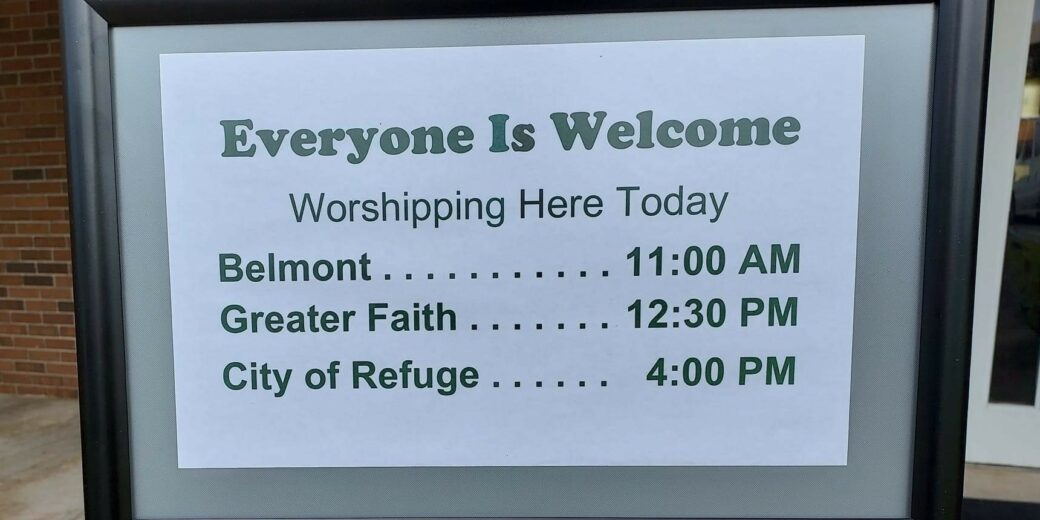 Belmont Baptist is a smaller membership church with a big heart for missions and, as it has shown in the last year, an even bigger heart for partnership. In the summer of 2021, the church already housed the receiving and bulk storage operation of the CMBA Food Pantry when it entered into an agreement to share its building with new CMBA church plant City of Refuge. After fellow CMBA member church Greater Faith United Missionary Baptist experienced a devastating fire July 31, 2022, Belmont again showed commitment to its community by loving local churches well.

“When I heard about the fire I immediately began thinking and praying about what I could do, and what Belmont could do. I prayed that Belmont and I would be brave and generous,” says Belmont Pastor Brenda Kneece, who adds church leadership unanimously agreed to help Greater Faith.

Kneece already had a relationship with Greater Faith’s pastor, Dr. Charles Graham, and issued the invitation for his congregation to gather and hold worship at Belmont the following Sunday, August 7. Honoring the existing space sharing agreement with City of Refuge, Kneece consulted with Rev. Jarrian (JayWill) Wilson to assure his congregation’s worship time and space would be protected and shared about Belmont’s desire to help Greater Faith.

Kneece reports prayers and discussions about next steps are in process, and that all three churches will be sharing space at Belmont for at least the next six to nine months. This includes finalizing an agreement with Greater Faith, as Belmont did with City of Refuge, representing what the church needs and what Belmont can offer.

“I had no idea these conversations would produce such generosity running both ways. It’s an amazing place to be,” Kneece says.

Operationally, members from the three churches will meet monthly to manage the working details of the mutual agreements and calendaring. This situation coincidentally happened as Belmont and City of Refuge were reviewing their annual agreement, which Kneece said was completed first out of respect to the two churches’ existing relationship. Moving forward, each of the three churches will leave the shared space prepared according to the needs of the next congregation using the space. The churches plan to reevaluate the agreements regularly.

“We have been invested and trusted with a certain amount of the world’s resources. It’s our job to be Christian stewards of those resources,” Kneece says. “Our building sits empty too much of the time so having it used in ministry in the community – and now another five or so hours a week with the presence of Greater Faith – just means we’re being good stewards. It doesn’t glorify God or His Kingdom on earth for Christian buildings to be empty, there are too many needs in the community.”

One homebound Belmont member contacted Kneece to share how pleased she was to see her church portrayed in local news coverage saying, “Belmont looks so pretty.” That same member offered to contribute what she could toward Greater Faith’s rebuilding efforts, as just one of many examples of goodwill Kneece has observed through this experience.

“This member’s call will stay with me. Generosity and bravery call forth generosity and bravery from others. This particular member in the world’s eyes has very little. But because her church looked pretty and her church was demonstrating generosity, she wants to be a part of that. That’s what we are to each other. We all have an opportunity to be the cheering squad for everyone else and when the game is over, we get to walk each other home. You can’t beat that,” she says.

Greater Faith has organized a corporate GoFundMe account for donations that will go toward the congregation’s rebuilding efforts.

Robbie McAlister: “God is Sovereignly Doing Something” Through Ukraine