Sharing God’s Love “Behind the Fence” 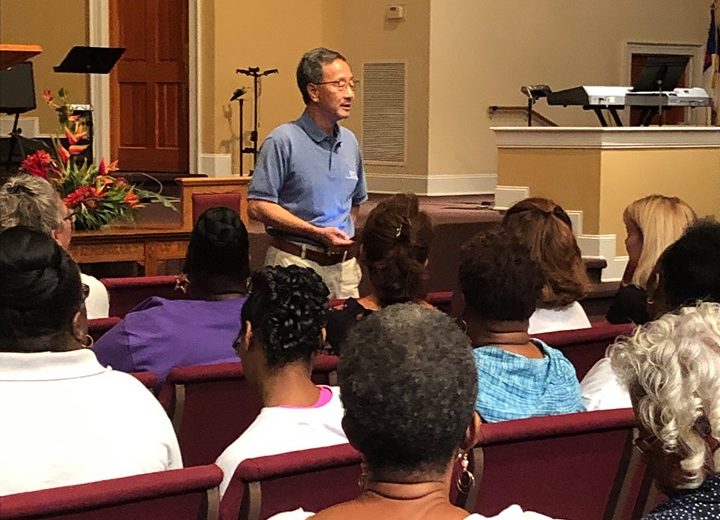 Sharing God’s Love Behind the FenceDownload

Where does prison ministry fall on your church’s list of community outreach opportunities? Many churches participate in the statewide Christmas Prisoner Packet ministry through the South Carolina Baptist Convention – more than 24,500 packets were collectively donated in 2018. Others, including churches in the Columbia Metro Association, work year-round to build relationships with inmates and staff to share God’s love.

According to June 2019 online statistical data shared by the South Carolina Department of Corrections (SCDOC), there are more than 18,800 total incarcerated individuals in the state system. The average age of an inmate is 39, on average they have a 10th grade education, 49 percent do not have a high school diploma or GED, and more than 80 percent are considered new to the system. Churches have an incredible opportunity to partner to meet the basic, educational and spiritual needs of these inmates before they are released back into their communities.

“Our churches can have an impact in our local prisons, and they may not even realize it. Matthew speaks to the ‘least of these’ and that as we serve we’re doing it for Jesus. Jesus in His deity spans time and space, who is to say that you’re not speaking to Jesus when you’re speaking to others. People don’t realize the impact they can have by just being kind to someone who has made mistakes in life. We don’t know the level of what happened to these individuals, but we know the level of what we can do and are called to do for them,” says Cathy Locklear, community impact ministry mobilizer with the Columbia Metro Association.

Locklear coordinates an annual Women’s Prison Picnic that is supported on all levels by local churches and in partnership with the Lexington Baptist Association. The 2019 picnic was held September 7 at Graham Correctional Institution in Columbia. There were 57 volunteers from 21 churches that provided picnic food, outdoor games and a worship service to more than 700 inmates and staff. Prison officials reported the lunch is something the women look forward to, and several off-duty staff members attended this year to show their support.

The lunch is one way that churches from the two Midlands associations can work together to impact local needs. Volunteers must be at least 18 years old to enter a prison facility, but Locklear says those of any age can participate by providing and receiving food deliveries the day of the lunch at nearby New Heights Baptist Church. For example, a youth group from Sawney’s Creek Baptist Church has been helping to receive and sort the picnic food for the last five years. As participants interact with inmates during the lunch there is also the opportunity to encourage them and build relationships.

“It’s the one time of year that the ladies can truly relax and mingle with each other. They laugh and have a good time and look forward to it. And they say the food is wonderful,” adds Locklear.

“One warden said that this is one day that these ladies forget they are in prison. We are there in the name of Christ to help them to enjoy and celebrate their life for that day. Our volunteers are encouraged through the conversations and prayers they have with inmates, and hopefully they encourage the inmates to live a righteous life while they are behind the fence,” says David Lee, associate director of lay mobilization with the Lexington Association.

As with any ministry opportunity through SCDOC, including the annual lunch, volunteers must go through a background check at least two weeks prior and receive an operational and safety orientation before being admitted to any state facility. It’s a unique experience for a volunteer to hear the doors clicking shut behind them, but Locklear says many nervous fears disappear quickly from first-time volunteers when they join in worship experiences or begin to talk with inmates one-on-one.

The Graham Correctional Institution also houses the state’s Receiving and Evaluation unit, where all incoming female inmates are processed. These women are housed separately and are not allowed to participate in the associations’ picnic with existing inmates. Bill Wright, associate pastor of Temple Baptist Church in Columbia, and his wife Stephanie have been helping with the picnic for about 20 years and were part of a special worship service held for this new inmate population.

“This year the service went on at the same time the service was being held for the main population. Janey Colmorgan sang and spoke to the inmates and then gave them an invitation to follow Christ and the opportunity to request prayer. The volunteers can then minister one-on-one with inmates that desire to have someone to pray for them or who have a desire to talk about spiritual things. Stephanie had the privilege to lead one inmate to Christ in the worship time this year,” Wright reports.

Colmorgan, founder of Takeaway Ministries and member of First Baptist Irmo, has been involved in prison ministry for almost five years. She says it was a ministry she sensed God was leading her to become involved in, even though she hadn’t considered it before. As she prayed about it she developed a realization for the needs that exist for incarcerated women.

“I knew nothing about women in prison, but I knew they needed Jesus. The first time I went inside it was to speak to women in solitary confinement. I shared the message God had on my heart and then began singing a cappella. Women were praising the Lord from within their cells, and I could tell the Lord was working in them. I thought, when can I come back here,” she says.

At the picnic, Colmorgan says that the women she encounters from the separate unit have been in prison less than 90 days. They are broken, grieving the life they had outside of prison and have lost hope. She notes that most know they need a savior and God’s truth speaks to their soul.

“Going into prison is to put the love of Christ on display. It’s an opportunity to minister to people who are unloved and who have done things that are not lovable. What an opportunity for us to share the love of Christ – no matter their lifestyle, beliefs or understanding of Christ – but to love them right where they are just like Christ loves us. I think that’s why I enjoy prison ministry so much, because you see the Lord there and His truth cuts the darkness like a knife. It brings me great joy, and is a blessing to be a part of,” Colmorgan says.

“The women here are in a crisis. As volunteers all we do is show care and compassion and share the greatest news of all, the good news of the gospel,” adds Wright.

“As human beings we can have the perspective of ‘how can I make a difference?’ It’s the Lord working in and through us in whatever ministry you do, whether you make food for the picnic or serve in prisons often. I love seeing the groups from Columbia Metro and Lexington Associations laying hands on these women and praying for them. It’s a demonstration of our understanding of forgiveness and wanting to show that love to others,” says Colmorgan.

“As I walk in and sit down with inmates I’m talking to and loving on Jesus himself. I think that’s what Christ meant in Matthew 25. ‘You’ve done it unto Me,’ not on His behalf,” Lee says.

Lee, who has participated in prison ministry for 35 years, says he sees many churches visit adult and juvenile prisons on a regular basis through Bible studies, pre-release programs, arbitration programs for youth offenders and special studies on topics such as developing authentic manhood and fatherhood.

“Many are open to accept Christ and hear the gospel. There is opportunity for direct evangelism, but the inmates drive the conversation. If they bring it up and open the door, we have the freedom to follow up with that conversation,” Lee says.

Wright participates in prison ministry year-round with the Prison Initiative degree program through Columbia International University. He works with the same group of male inmates for two years as they study. He encourages churches to explore opportunities to serve the local inmate population through existing ministries or contact a prison chaplain for specific needs.

“I have found that the chaplains for the institutions are open to you making an appointment and talking with them about their ministry and the needs of the population they serve,” Wright says.

For her part, Locklear points out that churches should also be quick to connect the dots in prison ministry by sharing what compels them to serve.

“When the chaplain spoke introducing the speakers at the picnic this year, he mentioned prisoner packets and the inmates clapped. Whether it’s preparing a prisoner packet or dropping off chicken for a picnic, these inmates know where it’s coming from. It’s up to us when we go in to communicate the ‘why’ and how it can change their lives. It all ties together and all makes a difference,” she says.