Religious “Nothing in Particulars” on the Rise Statistically 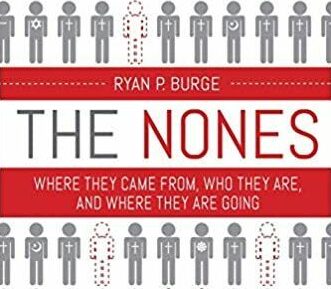 In his new book The Nones, Pastor and Social Scientist Ryan Burge explores the meaning of current data revealing that a surprising number of people are choosing not to identify with any religious affiliation. In generations past, respondents may have indicated that they were “evangelical” or “Catholic” when asked by pollsters even if they were not active in their faith or a church family. Burge maintains respondents are now revealing in greater numbers a bleak reality that America no longer a majority Christian country. What will the Church do to reach the “Nones?” 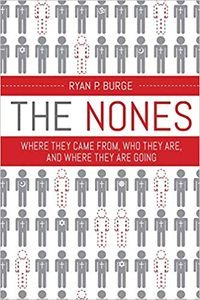 CMBA Executive Director George Bullard recently interviewed Burge and the discussion is now available as a podcast here. Burge, who holds a PhD in political science specializing in religion in American politics, shares how a simple 2019 viral Twitter post led to the writing of his book. The concept piqued worldwide curiosity about the profile of who is making up this growing unreached people group.

In the book Burge responds to “what people seemed to be interested in already and something I can bring my own perspective to. I tried to bring clarity and knowledge to the discussion about the religiously unaffiliated primarily as a social scientist and as a pastor, something the world hadn’t seen before.”

The Nones systematically works through the description of the American religious landscape (how statisticians try to quantify religious affiliation) and Burge does his best to explain religious disaffiliation in layman’s terms. Along with large quantities of data, readers are presented with helpful interpretations and applications that connect the dots for action. So, who are the “Nones?”

Burge says they are three distinct groups which include atheists, agnostics and those that do not affiliate with any religious group but may indicate that religion is important in their lives or have had past religious experience. Making up 21 percent of respondents, Burge says these “nothing in particulars” are the fastest-growing religious group, with a seven percent growth in the past 12 years alone. They represent a fairly even cross section of the population.

“They aren’t highly educated, high income or militant against religion. A good percent say religion is important in their lives. They say they are not these [listed] religions and are not agnostic/atheists either. They are the same size as evangelicals and Catholics,” Burge says of this emerging group.

The statistician admits the data leans toward evaluating church attendance, not so much a reflection of one’s spiritual life. He points to panel data tracking as a strong indicator that, at least for the same people over a four-year period of time, atheists may have stayed resolute but the “nothing in particulars” were willing to make a move toward the Church or walk further away. According to this data, four percent of American Nones will switch back to religion at some point.

“One out of five who responded to the survey are Nones. One out of five Nones have returned to church over a period of time. If you target those folks and genuinely focus on them, it’s possible that one out of five will return to church. That’s a pretty good return on investment. If you threw out 100 leads and 20 percent returned with a sale, you’d be the best salesman on earth in almost every industry,” Burge says of the data interpretation’s link to fertile ground.

In their discussion Bullard invited Burge to elaborate on certain topics covered in his writings, including the idea that “empty nesters” – those whose children are grown and out of the house – may be a growing segment of the Nones population.

Data reflects that most people are not religious while in their late teens and early 20’s but, when they get married and have kids in early 30’s, they will grow closer to church. As the children grow, they stay for their kids’ foundation in church. As the empty nest life stage hits, Burge says data indicates those 50 years and older are quietly leaving church and not returning.

“The insight from the data on what happens to empty nest households confirms my observations over the past two decades,” adds Bullard. “I believe focused ministry with empty nesters is an important strategy for many congregations to consider.”

Community is another important link spotlighted in Burge’s data and studies. He says the socialization of church is a huge benefit to self, community, democracy and the world, and the reality is that many come to church because they just want to have friends. Focus less on the reason that gets them in the door, Burge says “its not a waste of time and resources if everyone or no one comes and gets saved.” Burge encourages churches to maximize gyms, fellowship halls and their beautiful campuses to intentionally foster community.

In summary, Burge points pastors reading The Nones to its final chapter which speaks to globalization versus secularization. Data and history show that America’s secularization was inevitable. Burge hopes the book provides avenues to show that even in these days and under this statistical reflection that there are things Christians can do to reach out and the Church can still play a vital role in American society.

“The Church is still needed, it just needs to think of problems differently, accept what it cannot change and focus on the things that it can change. The church is well-suited to provide and meet needs of Nones by showing the love of Jesus in a Church community and welcoming them back,” Burge says.

For more information on Burge and his work, visit www.ryanburge.net. Interested CMBA churches may request a free copy of The Nones by emailing CMBA@ColumbiaMetro.org.

A Wednesday Word from George Bullard for December 1, 2021