New Roof at GraceChurch of Columbia Evidence of “Kingdom Work” 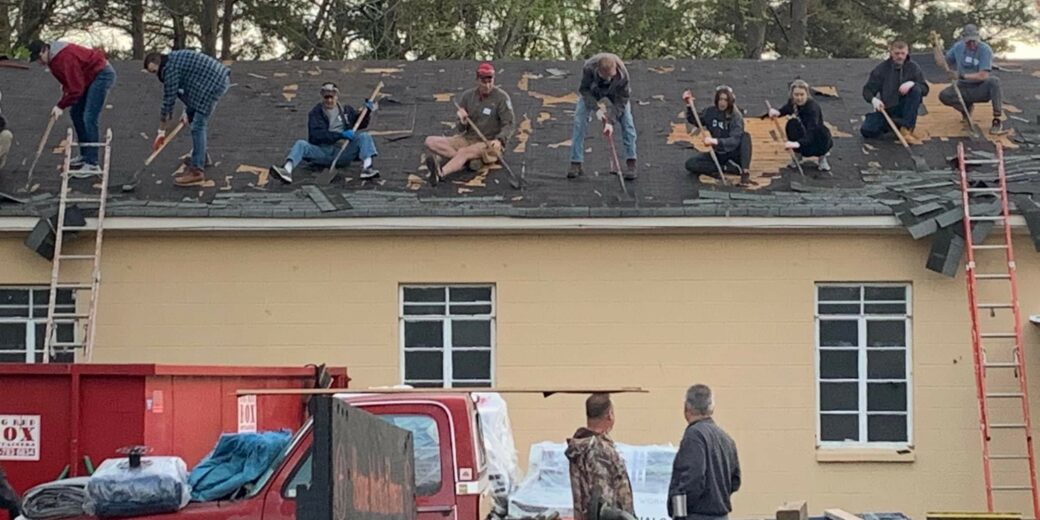 Early one recent April morning about 140 Midlands volunteers showed up to reroof GraceChurch of Columbia, located a few blocks from Forest Drive. The project birthed through conversations with Love Cola and the nonprofit agency Home Works of America grew to include members of about six churches, Baptist Collegiate Ministry (BCM) and a roofing contractor’s work crew.

Pastor Bill Crews celebrates the spirit of partnership he saw that day, choosing not to “acknowledge any churches [who served] by name – it was Kingdom work.” At the same time, he says there were “so many people that knew each other from other connections, so there was a lot of connecting the dots on how they got there.”

One of those connections happened between BCM Director Jamie Rogers and Home Works representatives who discussed future campus ministry volunteer opportunities. Rogers brought BCM students and three of his own children to participate in the project that would “give back to and join with so many other Columbia-area churches that have given so much to BCM over the years. It was so encouraging to see all that God was putting together that day and to see so many people from our area love one another and unify around a common goal.”

From the beginning, this project was of particular interest to Home Works Executive Director Joe Huggins. In addition to being personal friends with Crews, Huggins is the son-in-law of a former pastor of Harrison Road Baptist Church, whose buildings and properties were given to GraceChurch of Columbia through CMBA. It was significant to help improve the church building that meant a lot to his wife and her family.

“It was wonderful to be a part of a solution to a real problem, to see the hands and feet of Jesus, to watch the Church in action and taking care of each other. GraceChurch is poised to do ministry in that neighborhood that other churches couldn’t do nearly as well. What an overflow of blessing from just one Saturday,” Huggins said of the experience.

Huggins invited Kenny Robertson from North Trenholm Baptist and Mark Fisher, who serves on the leadership team with Love Cola, into discussions that brought momentum to the project. Love Cola is a city-wide effort for churches to work together to serve the community and is part of the larger Cola Network, which is a regular collaboration among local pastors to encourage discipleship, church planting and service.

This was the first reroofing project Love Cola has been a part of. Fisher notes “seeing the bigger picture that this can spread through the city makes it about much more than a roof. There are people that met that day and networking and relationships that were built that will continue,” including first responders who were members of different churches and others from a variety of communities across the Midlands.

The planning team anticipated needing 80-100 volunteers and were shocked when about 140 people showed up to serve. Then when a local home builder offered to donate his expertise a few days before the project and bring his roofing crew it was a project game changer. “Between the large number of volunteers and the home builder, we were finished by 2:30 p.m. which was about three hours earlier than we anticipated. This was a great example of churches doing more together – and it doesn’t have to be a roof next time, it can be something else,” Fisher says.

“I felt like a missionary that provided an opportunity for other teams to come in and experience a work of the Kingdom,” Crews adds. “Yes, we got a huge benefit out of it. But it was the opportunity afforded to others to be a part of something bigger than themselves that was the fun part.”

As for his congregation, Crews believes they share a collective sense of affirmation that God is honoring their giving spirit as “the building itself was a gift to us from CMBA. We have always had the mindset that it wasn’t ours to hoard and have always tried to let as many organizations as possible use it for ministry. I think this roof project shows that God honored that mindset.”

For his part, Huggins calls the reroofing project “fun. I just brought a trailer of hammers and screw drivers. We are so invested in what Love Cola is trying to do and passionate about changing the heart of our city. Through Jesus, we all need to be the difference and we will see the difference.”

Out of this experience, how does GraceChurch of Columbia see its own future missional story?

“Little churches always think big churches should do more. Maybe this shows a little church that the big churches are out there doing it so that when Love Cola opportunities come around, we need to jump in,” Crews suggests.

CMC 035: Bill Crews on Focusing on the Deep and Trusting Jesus with the Wide

BCM: Church Partners Needed to Reach Students with the Gospel