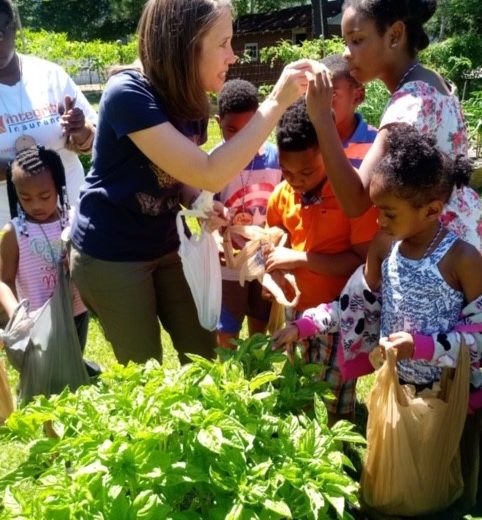 This summer about 50 children from the Eau Claire community are experiencing a six-week enrichment day camp at no cost to them through Koinonia ministries. Their days include scholastic and creative learning opportunities, harvesting a garden and a warm lunch, all from the home base of Eau Claire Baptist Church. By hosting Koinonia ministries year-round, the neighborhood church is showing the community that it cares about their spiritual and basic needs.

“I want for every child to learn while they’re here that they are a child of God. I believe that’s what I’m supposed to do because that determines everything – if you can know your worth, that you’re God’s beloved, that makes all the difference. I tell the children that ‘I see a little piece of God in your eyes or smile.’ One boy just told me ‘a little piece of God lives in all of us,’ so it helps to know that they get it sometimes,” says Kelly Strum who, with her husband, founded Koinonia in 2017.

The Strums joined Eau Claire Baptist years ago when Kelly was completing a seminary degree, and she was later called to join the staff. Then, after spending several years away from the area, Kelly and her family returned to Eau Claire Baptist in 2016. During her seminary years Kelly was first introduced to the asset-based community development non-profit Metanoia ministry, and the concept took root.

“I studied this sociological model that recognized the dignity of every person as Jesus would, making it a theological model. I watched it work in Metanoia’s area of North Charleston, which has seen true community transformation through their model. The concept is to walk along side of people, not ‘save’ them, and grow the assets already there for development from within,” she explains.

The Strums approached Eau Claire Baptist about serving as a host site for Koinonia and the church agreed to devote the entire third story level of its education building to the ministry. The location is a perfect hub within the community, which has seen economic decline for several decades. What the outside world might describe as a neglected neighborhood without even a viable grocery store Kelly sees as a place still home to people created by God that possess gifts, talents and abilities that deserve to be fostered.

“We teach the kids Koinonia’s vision in a succinct way, saying we are anchored deep like a tree at a riverside, flying in formation together, so that all may know community…which is the meaning of the Greek word ‘Koinonia.’ We talk a lot about community leaders, partners and cooperation. We can see geese instinctively flying together in formation as God instilled in them and discuss how that ties into the concept of going farther and getting more accomplished together,” Kelly says.

Now in its third season, the summer enrichment camp meets a huge community need that Kelly discovered after meeting with local mothers several years ago. One such need is the ‘summer slide,’ referring to the trend that children living in low income areas are shown to lose up to one-third of their scholastic progress from the previous school year during their summer break. So, the 9 a.m. to 5 p.m. camp is structured to include academic instruction in reading, writing, Bible and math during the morning, then a warm lunch prepared by volunteers. After recess the children rotate between art, music, character education, computer, games and snack time during the afternoons. There are occasional day trips and experiences incorporated, too.

“Even if we can’t address every need of children in these early years, I want to be sure that the children leave Koinonia each day knowing they are a child of God,” she says.

Koinonia also operates a free after-school program offered two days a week during the school year that is run by trained volunteers and partners from the church and community. For Earth Day this past spring the children planted a garden located right next door on the property of the Lutheran Theological Southern Seminary, an important partner with Koinonia. During the summer program the children pick the cucumbers, bell peppers and tomatoes from the garden to take home to their families. They share the excess produce with the seminary and local nursing homes which, Kelly says, is an opportunity for them to serve others.

“Koinonia is driven by elements of social justice and we also work to focus on the emotional welfare of the children’s parents. We’ve found that if we can create a safe space for parents here, then they will walk with us and are part of solutions. Parents are our partners,” she adds.

Partnership is key to the success of Koinonia. “We are openly faith based but would love to partner with more civic groups. We invite anyone interested in the welfare of the community and the families here to join us. We are limited in the number of staff members we can hire, and with our goal to have the lowest volunteer-to-child ratio possible we lean on volunteers to make or break the programs,” Kelly says.

Kelly’s vision for Koinonia includes expanding its value in the community. She would like to work with Eau Claire neighborhood partners to identify assets in the area, such as small business owners like mechanics and seamstresses, to create a register for an eventual asset map. Then the community could promote and begin supporting those assets which would then stimulate community development. Kelly says the idea of supporting each other from within and spending time working together benefits everyone.

“There’s a neat transfer that happens, I call it mutuality, where you don’t know who’s giving and who’s receiving. I think that’s where the kingdom of God breaks in,” she says.

For the children and families in the Eau Claire community, Koinonia will continue past summer into the coming school year. Through Koinonia and the hands and feet of those serving in Jesus’ name, Kelly prays to see what true community looks like here on earth, as it is in heaven.

“I’ve seen the power of community. When we’re in a place of being welcomed and received, it’s just as therapeutic as medicine. When I see how some people have community and some don’t, I am forced to ask what we can do to bridge those gaps to provide community to those who don’t have one. We all are to take care of each other. It can be done,” she says.