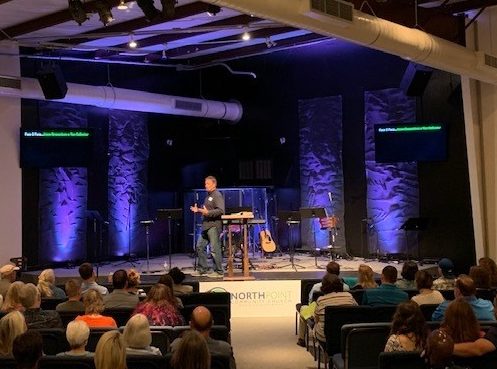 “We are going through a remodeling stage. In this process God is remolding us to eventually become more focused on our neighbors. We were previously a more regional church, and now God is calling us back to our community,” Freddy says.

The congregation partners with a local elementary school and offers an Easter egg hunt to engage with local students and their families. North Point Community Church is literally next-door neighbors to a new community of about 80 homes. Freddy says the church is modifying Thom Rainer’s “Pray and Go” outreach approach to help them make more meaningful contacts.

“We have targeted a two-mile radius, and church members go out in pairs to pray for each home on each street within the area. We have prayed for close to 600 of the several thousand homes and home sites located in our ‘Jerusalem.’ We leave a door hanger telling them we’ve prayed for them and have already had a couple of phone calls and stories of neighbors who say they appreciate it,” he says.

Another North Point ministry – a Bible study geared to single adults – reflects part of Freddy’s own spiritual journey. Before he served in single adult ministry leadership or as a church staff member and even before he was a Christian, Freddy says he consciously chose to live an authentic life. He was raised in a Christian home in Hendersonville, N.C., and as a teenager decided he wouldn’t “embarrass God” by pretending to be a Christian.

“At a young age I started working for a corporation and was promoted to management in my early 20’s. I had what the world would say was a great life, but deep down I knew something was missing. I filled it with the things of the world and kept running dry on that. One night in a bar, through the power of the Holy Spirit, Jesus came in and changed my life forever. I’ve been living for Him ever since,” Freddy says.

Over the next two years Freddy’s career path continued to climb, and he grew stronger in his faith. He became active in the single adult ministry at Bent Creek Baptist Church in Asheville and eventually began serving in a leadership role. He also began working as a consultant with the Billy Graham Evangelism Association and, while serving in Central Africa, says he felt led to resign from his position and go into full time ministry.

“God blessed my local outreach ministry. Many came to Christ and experienced all kinds of healing, including following marriages that had been destroyed. At that time I was working 60 hours a week plus 30 hours a week in ministry and had no life outside of those two things. I told God I’d do whatever He wanted and was open to full time ministry,” Freddy recalls.

God worked through remarkable details of his transition to full time ministry, including providing salary and benefits through his former job for his first two years on church staff. He served at Bent Creek Church for 15 years, then as the single adult minister at Shandon Baptist Church in Columbia for four years before being called to a church in Memphis, TN. While Freddy currently serves as pastor, his passion to reach single adults is still very present in his life.

“I started in single adult ministry at a time when churches were open to having ministries and there were church staff devoted to doing it. Very few full-time single adult ministers exist today yet the population is 40 to 50 percent single adults, so there are more single people than married people out there today,” Freddy says.

Ridgecrest Conference Center hosted a popular Labor Day Singles Conference for many years. Freddy says during the 37 years he personally attended there were as many as 1,500 single adults at the event, yet the conference was permanently cancelled in 2014. He and two other regional single adult leaders hated to see the experience end and decided to make the decision year-to-year to continue hosting a similar Labor Day weekend event in the mountains of North Carolina. Training and ministry support are also offered to single adult ministry leaders prior to the start of the conference each year.

“Three years ago, we moved it to Bonclarken Conference Center in Hendersonville. There is an annual theme – this year it’s EPIC, Empowering People Imitating Christ – and the weekend includes biblical teaching, great praise and worship and excursions. It’s a combination of a retreat to be biblically fed and renewed, and a mini vacation because of the free time built into it,” Freddy explains.

There are attendees from about 15 different states each year along with some travelling there from international countries. Attendees are racially diverse and cross denominational lines. Freddy admits limited funding is challenging for the planning team to promote the event and they rely on reaching out to pastors and getting the word out on social media.

“God continues to bless the weekend. The cool thing is every year several people are saved. All kinds of healing takes place, including emotional and physical healing. Singles are spiritually fed and renewed at the conference, then return to be a vital part of their church and community,” he says.

Freddy and the other conference sponsors work hard to see that the annual conference reaches as many single adults and ministries as possible. To churches with an active single adult ministry or those wishing to start one, Freddy goes on to say that size doesn’t matter. Larger churches may have more resources but smaller churches, like North Point, can also reach single adults in meaningful ways.

“We have a singles Bible study at my church. There are 33 members on the roll and an average of 20 regularly attend. Bible studies for single adults are an inreach and outreach opportunity with all kinds of ministries birthing out of it, especially if a pastor has a vision to see it grow. I am passionate about seeing singles loved, reached and cared for,” he says.